ANAHEIM, Calif., Sept. 27, 2022 /PRNewswire/ -- Talesun Solar caught the attention of customers and peers with the display of three of its flagship modules at Booth #430 of the 2022 edition of Solar Power International (SPI). 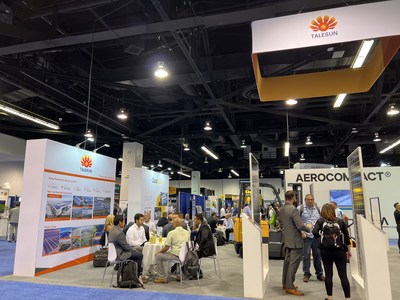 Co-hosted by the Solar Energy Industries Association (SEIA) and the Smart Electric Power Alliance (SEPA), this year's SPI, the largest solar power trade show in North America and one of the most influential international exhibitions in the industry, was held at Anaheim Convention Center on September 20-22, 2022. The event brought together more than 650 exhibitors and over 18,000 visitors.

In recent years, with enhanced public awareness of environmental protection and the decline in prices for electricity generated from renewable sources, the US has made great progress in implementing its decarbonisation strategy while shifting to the model whereby most of the country's electricity is produced from renewable sources. In addition, the country has become the world's second largest solar photovoltaic (PV) market by focusing on investments in renewable energy projects, and, most notably, solar PV power plants.

By exhibiting the three unique modules that can be applied in various scenarios and significantly reduce power generation costs, Talesun Solar has demonstrated its strong competence in developing premium high-efficiency modules. The company's booth at the exhibition attracted a large number of exhibitors, visitors and customers who came to the booth for detailed consultation and business negotiations in the hope of establishing and deepening partnerships with the firm.

According to a report by the US Energy Information Administration (EIA), the country's installed solar PV capacity increased by 4.2GW during the first half of 2022 and is expected to grow to 17.8GW in the second half of the year. With the ongoing launch of new renewable energy projects around the country and the gradual phasing out of local coal-fired, natural gas and nuclear power plants, promising prospects are foreseen for the US solar PV market. These trends are expected to benefit Chinese makers that have built integrated production capacity in global markets given the impact of tariffs and limited silicon materials.

Talesun Solar, which started its PV manufacturing business in 2011, was recognized by Bloomberg New Energy Finance as one of the world's Tier 1 module manufacturers in 2015 and ranked among the world's top ten module suppliers in 2018. Over the past few years, the firm has gained increasing popularity among both domestic and international customers by virtue of its high-quality, high-efficiency and high-reliability PV modules. With a global sales network alongside an expanding base of market-leading customers and partners, the module manufacturer is well-positioned to experience a significant rise in global sales.

The three-day exhibition may be over, nevertheless Talesun Solar never ceases its efforts in bringing its latest innovation in technology to market. The firm plans to further enhance its capabilities in key technologies while continuing to provide high-quality products and premium services to customers worldwide in line with the new trends sweeping the solar PV sector, with the aim of contributing to the global energy transformation.