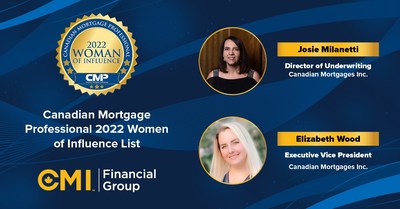 "Elizabeth and Josie are pioneers and trailblazers in a predominantly male field," said CMI founder and CEO Bryan Jaskolka. "They are both innovators who go above and beyond to mentor and support other up-and-coming female leaders, and to champion private lending education among mortgage professionals. They continually strive to promote excellence throughout the industry."

As CMI's Executive Vice President, Elizabeth has been critical in driving the organization's exceptional business growth and furthering its reputation as a top employer and respected industry leader. As chair of the Canadian Lenders Association's Diversity, Equity and Inclusion roundtable, she advocates for the empowerment of marginalized groups in the financial services industry. Elizabeth was previously named among CMP's 2019 Women of Influence, and was also honoured as the Canadian Mortgage Awards' 2021 Woman of Distinction.

As Director of Underwriting, Josie leads CMI's mortgage originations team. She is a Canadian Mortgage Awards five-time finalist for Lender Underwriter of the Year, and with more than 20 years in private lending, she is one of the most knowledgeable and experienced underwriters in the mortgage industry. By fostering collaboration and continuous improvement at every step of the adjudication process, Josie has helped shape and define the private lending industry's distinct approach to mortgage origination. This is the second year in a row that she has been honoured among CMP's Women of Influence.

"I can't think of two more worthy recipients of this honour," added Jaskolka. "Elizabeth and Josie's contributions have been foundational to the successful growth of the private lending space in Canada. We celebrate them both for this achievement and congratulate the other exceptional women named to this impressive list of mortgage industry leaders."

Published by Canadian Mortgage Professional (CMP), the Women of Influence list candidates were nominated by other mortgage professionals based on their professional accomplishments and industry contributions, as well as their commitment to diversity and inclusion in the workplace. The final list was selected by a judging panel made up of industry leaders and previous Women of Influence.

Founded in 2005 as a family-owned mortgage brokerage, CMI Financial Group (CMI) has grown to become a multi-faceted award-winning leader in the Canadian non-bank financial services market. CMI comprises four interrelated companies: CMI Canadian Mortgages Inc., CMI Mortgage Investments, CMI MIC Funds and CMI Mortgage Servicing. These companies work collectively to originate, underwrite, fund and service mortgages end-to-end for brokers and investors. CMI is one of the fastest-growing companies in Canada, having been named to the Report on Business ranking of Canada's Top Growing Companies in 2020 and 2021. CMI was named 2022 Private Lender of the Year by the Mortgage Awards of Excellence. With over $1.5 billion in mortgages funded since inception, CMI is one of Canada's largest private mortgage investment providers.