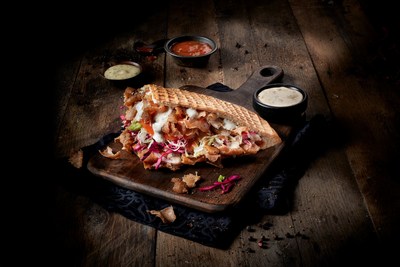 "As the global industry leader, GDK is revolutionizing the doner kebab experience, and we're excited to bring our fresh, high-quality taste sensation to North Americans who are looking for an alternative to the burger and sandwich," said Belton. "We've assembled a team of stellar executives with a wealth of food and beverage experience, and we're excited to utilize their expertise to aid in our continued growth."

With global headquarters in Glasgow, Scotland, GDK, is focused on providing its customers with fresh, premium, quality ingredients at affordable prices. As the fastest growing fast-casual restaurant group in the UK, GDK has over 125 restaurants in the UK, Europe, the Middle East, and is now rapidly expanding rapidly into the US and Canada. GDK opened its first US site in New Jersey's American Dream Mall in 2021. In Canada, three locations are currently open; one in British Columbia and two in Ontario.

"It is exciting to have the opportunity to shape the creation of the processes, behaviors, and relationships with our franchisees to help GDK grow in North America," said Bray. "As we continue our quest to bring the doner kebab sensation to the people, I look forward to creating a guest experience that will keep them coming back again and again for our fresh food and great service."

The North American operation has ambitious growth plans for the US as it gets set to open ten locations in 2022, including its first two in the Houston area, Sugar Land and Houston Heights, the company also announced. Clyde Foods has signed on as a multi-unit developer in Houston, an agreement that includes 15 restaurants over the next ten years and five locations open by 2025. In the Dallas area, a franchisee has signed a multi-unit deal to develop five restaurants in Dallas and its northern suburbs.

GDK's New York franchisee has signed a development agreement for 25 restaurants over 15 years, with six locations open by the end of 2022. These strategic sites include Midtown Manhattan, Brooklyn, and Astoria in Queens. In Canada, the search is on for additional sites in Mississauga, Ontario and Surrey, British Columbia.

ABOUT GDK
German Doner Kebab is a fast-casual brand that is revolutionizing the market, providing guests with a premium, high quality, approach, and elevated dining experience to traditional doner kebabs. GDK has over 125 restaurants globally and is the fastest-growing international

kebab brand in the world. GDK opened its first restaurant in Berlin in 1989 and spent the next decade developing its products and recipes, creating its own unique blend of spices, innovating its signature sauces, and perfecting its distinctive handmade 'doner kebab' waffle toasted bread. GDK's gourmet doner kebabs are made using premium quality ingredients, lean succulent meats, and fresh locally produced vegetables that are delivered and prepared daily along with our handmade bread. With global headquarters in Glasgow, Scotland, the brand has grown at great pace in the UK, Europe, and the Middle East and now rapidly expanding in the US, Canada, Saudi Arabia, and Ireland. GDK is an affiliate of the Hero Brands group. For more information, please visit germandonerkebab.com.