Spokenote Launches New Product Allowing You to "Add Video to Anything"

Spokenote's printed stickers provide a gateway to a video creation and sharing platform. Each spokenote sticker features a unique spokenotetm code that users can pair with a recorded or uploaded video. Once the code and video are paired, anyone who scans the code on the sticker can view that video.

"With a spokenote sticker, you can add video to pretty much anything," said John Wechsler, founder and CEO of Spokenote, LLC. "It's a powerful concept that's changing the way people communicate. We also made it really easy to use ? just scan, smile, share ? there's no app to download or account to set up."

At last count Wechsler said he and his team have come up with over 150 different use cases for their product. Some of his favorite applications include: personalizing gifts like flowers, greeting cards and gift cards; enhancing rental properties with instructional videos showing guests how to use a coffee maker or remote control; and even helping patients remember home care instructions after being discharged from the hospital.

"The reception for the product has been nothing short of amazing, because there are so many ways that it can be used," said Wechsler. "In fact, as we've previewed it with potential customers and partners, it has gotten harder and harder to keep things under wraps. When people see it, they want to try it out."

The company's week-long launch plans are generating some high-profile visibility for the product. Attendees at last week's Daytime Emmy Awards at the Pasadena Civic Auditorium received a 10-pack of spokenote stickers inside their swag bags. The product is also being featured in several of the Spark Fishers events put on by the city of Fishers, Indiana, where the company is headquartered.

"It is very exciting to bring our first product to market in association with all these live events as part of our launch," said Wechsler. "We can't wait to see the many different ways people use spokenote stickers."

Wechsler, who has founded multiple businesses in central Indiana, noted that several large retail outlets and online stores have expressed interest in carrying the product.  Until those deals are finalized, spokenote stickers are available via the company's online storefront (spokenote.com) and on Amazon.com.

Spokenote develops technology that improves how people communicate, providing tools for human expression and communication via digital media. The company's initial product ? spokenotetm stickers ? provide a gateway to a video creation and sharing platform. Each spokenote sticker features a unique spokenotetm code that, when scanned by a mobile device, can be paired with a video created by the user. Once the code and video are paired, anyone who scans the code on the sticker can view the video. The company is headquartered in Fishers, Indiana. For more information or to purchase spokenote stickers, visit spokenote.com. 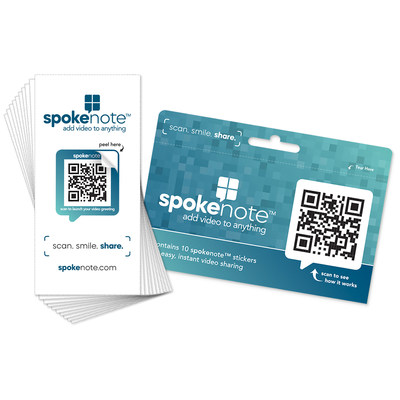 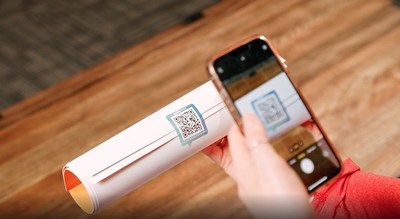