WATKINS GLEN, N.Y., June 27, 2022 /PRNewswire/ -- For the fourth time in seven races in the 2022 IMSA WeatherTech SportsCar Championship, Acura led the way today at the Sahlen's Six Hours of the Glen, scoring a 1-2 finish, with the Wayne Taylor Racing duo of Filipe Albuquerque and Ricky Taylor in their Acura ARX-05 scoring their third win in the last four races. 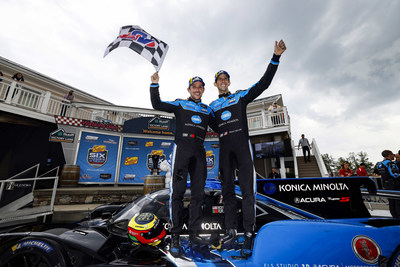 Tom Blomqvist and Oliver Jarvis completed the Acura 1-2 sweep with a second-place finish in their Meyer Shank Racing ARX-05.

The two Acura teams traded the lead repeatedly during the first half of today's race at Watkins Glen International Raceway in upstate New York, after the WTR team elected to go "off strategy" early in the race.  As a result, each Acura team would turn the lead over to the other during their respective stops.

MSR appeared to get the upper hand in the contest in the fourth hour, exiting the pits ahead of WTR, and maintaining that lead until severe weather in the Watkins Glen area forced race officials to halt the contest with 90 minutes remaining.  When the race resumed with just over 20 minutes to go, Albuquerque in the Wayne Taylor Acura was able to draft past Blomqvist's ARX-05, and would maintain a narrow advantage to the checkers.

In the production-based GTD class, the #66 Gradient Racing Acura NSX GT3 Evo22 driven by Till Bechtolsheimer, Mario Farnbacher and Kiffyn Simpson made up a number of positions in the opening hour in that hands of Bechtolsheimer, but was soon forced to go behind the wall with a mechanical issue and eventually retired.

Filipe Albuquerque (#10 Wayne Taylor Racing ARX-05) Race winner, on his late-race pass for the victory: "It was crazy. I had to save fuel, so therefore I could not warm up the tires and the brakes before the restart. So, I had to restart with cold tires and brakes. I knew this [going into the "bus stop" chicane at the end of the long uphill Watkins Glen back straight] was the one and only shot to overtake [Tom] Blomqvist. I just put my foot down and we ended up side by side and I just 'sent' the car into the corner.  It went over the curb and it ended up working."

Tom Blomqvist (#60 Meyer Shank Racing Acura ARX-05) Finished second: "It's definitely a tough way to finish, especially after we were so strong all weekend. They [the WTR Acura] had an advantage all week in the first sector [of the track]. They were running less wing that we were, so they were quick there. It just meant we were vulnerable in our restarts. That time [the final restart], he was just a little bit closer. They were also way less on fuel, so they weighed like 15-20 kilos lighter, which also helped them. Luck was on their side today, but we had a perfect race. I mean, the team did a fantastic job for such a long race. We've had the quickest car all weekend long, but things didn't fall our way. Obviously, I'm extremely disappointed for the team, who have been working hard all week. Thankfully, not long until the next [race]."

Lee Niffenegger (Program Manager, Honda Performance Development) on today's 1-2 finish at the Sahlen's Six Hours of the Glen: "It is a fabulous 1-2 at Watkins Glen, and our first prototype win here with the Acura ARX-05. Fantastic driving and fuel saving by both of our teams to finish first and second and hold off the competitors to collect vital manufacturers' championship points. Both Wayne Taylor Racing and Meyer Shank Racing executed all race long, great driving, great pit stops?really important in a six-hour race. We're so happy to have gone 1-2 in both the Rolex 24 to start the year and now here at Watkins Glen. It's a great testament to Acura speed and reliability to dominate at these endurance events."

The IMSA WeatherTech SportsCar Championship next heads north of the border to Canadian Tire Motorsport Park, outside of Toronto, for a two hour, forty-minute race on Sunday, July 3, with live network TV coverage on NBC and live streaming on NBC Peacock.