Bruce Cook tackles his biggest project yet in Season two of By Hook or By Cook, debuting June 16 on AMI-tv

- Canadian Screen Award nominee returns for eight new episodes ?
- Casting for Season three of By Hook or By Cook is taking place now -

TORONTO, May 24, 2022 /CNW/ - Bruce Cook is back, and taking on his biggest project ever. Accessible Media Inc. (AMI) announced today that Season two of By Hook or By Cook, starring freestyle motocross rider Bruce Cook, returns Thursday, June 16, at 10 p.m. Eastern on AMI. 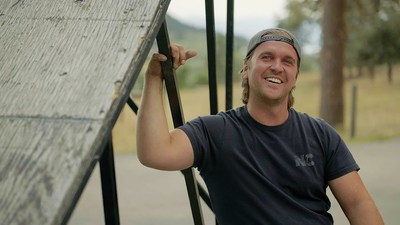 In Season two, Bruce Cook, a stunt motocross rider who is disabled, wants to help others with disabilities enjoy life's possibilities with unique innovations that he and his friend, Christian Bagg, create. Bruce has been depressed since COVID-19 shut down most activities which, in turn, has given him a lot of time to think about the reality of the injuries he sustained eight years ago. When given an opportunity to make a remote lake lodge more accessible for those with disabilities he jumps at the chance.

Working with Christian, who has been in a wheelchair for 25 years, Bruce learns about perseverance. He also learns valuable lessons from people who are also adapting to life with a disability which?over the course of the season?will allow Bruce to gain more insight into who he is at his core and what his abilities really are. He learns more about himself, his spirit and his tenacity than he's ever imagined.

In the premiere episode of By Hook or By Cook on Thursday, June 16, at 10 p.m. Eastern on AMI-tv, family friends enlist Bruce's help making a 100-year-old lodge deep in the mountains accessible, and it's up to the adrenaline junkie and accessibility advocate to bring his imagination and innovation to the test.

"Bruce's story, honesty and sense of humour really connected with our audience in Season one," said John Melville, Vice-President, Content Development & Programming, AMI-audio/AMI-tv. "Viewers are in for the ride of their lives in Season two."

Season one of By Hook or By Cook received a 2022 Canadian Screen Award nomination for Best Writing, Factual.

A series of digital exclusives?which can be streamed on AMI.ca and the AMI-tv App for iOS and Android?give fans a behind-the-scenes look at production on Season two of By Hook or By Cook, including updates by Bruce and Christian, and a sneak preview of what's to come. By Hook or By Cook is produced by Render Digital Media.

Season two of By Hook or By Cook features Integrated Described Video (IDV) making it accessible to individuals who are blind or partially sighted.

AMI and Render Digital Media are excited to announce that casting is now open for Season three of By Hook or By Cook.

Bruce Cook began his professional motocross career in 2005, touring across Canada. In 2014, he joined Nitro Circus, which features world-class athletes and daredevils performing outrageous and risky stunts. His first show found him attempting the world's first double front flip on a motorcycle and when the trick did not go as planned, Bruce suffered a broken vertebra and a damaged spinal cord, resulting in paralysis. After regaining his strength and confidence, Bruce was back on a modified bike and landed the world's first backflip as a paraplegic, 10 months after his accident.

Bruce shares his experiences with friends, family and followers like an open book told in a stream of consciousness of hope, humour, and raw emotion. He cannot escape the enormity of daily life as it is faced by a paraplegic, but he is navigating his way through life with determination, enthusiasm and a lot of creativity.

Before breaking his back on the slopes during a distance jump competition, Christian Bagg was an apprenticing machinist: a young tinkerer, adventurer, and outdoorsman.

In 1996, he found himself experiencing life from a chair that neither fit his impressive six-foot-five frame, or his expansive personality. Eager not just to participate, but to excel at outdoor adventures, Christian has spent the last 20 years designing and building adaptive equipment that aren't merely functional, but transformative.

What started out as a way to solve his own problems grew into an outlet to help others experience the very outdoors that he loves so much. Christian lives in pursuit of greatness not only for himself, but for those around us. He builds a better future.

By Hook or By Cook debuts Thursday, June 16, at 10 p.m. Eastern on AMI-tv. Stream episodes on AMI.ca and the AMI-tv App.

Render Digital Media is an independent production house based in Kelowna, BC, specializing in authentic, original television programming for broadcast. Our team is passionate about character driven live-action documentaries and lifestyle series that make the viewer think, laugh and feel. Learn more at Render Digital Media.

AMI is a not-for-profit media company that entertains, informs and empowers Canadians who are blind or partially sighted. Operating three broadcast services, AMI-tv and AMI-audio in English and AMI-télé in French, AMI's vision is to establish and support a voice for Canadians with disabilities, representing their interests, concerns and values through accessible media, reflection and portrayal. To learn more visit AMI.ca and AMItele.ca.