DETROIT, May 24, 2022 /PRNewswire/ --The Law of Attraction and the city of Detroit have set the stage for two powerhouses and great minds who think alike to collaborate and cultivate business, making the world a better place, one deal at a time. Tel K. Ganesan, a serial entrepreneur, film producer & distributor, motivational speaker, investor, and philanthropist, and Rayford Jackson, CEO of Cohorts Entertainment and Founder of Rayford Homes, have joined forces to maximize the global imprint of Kyyba. 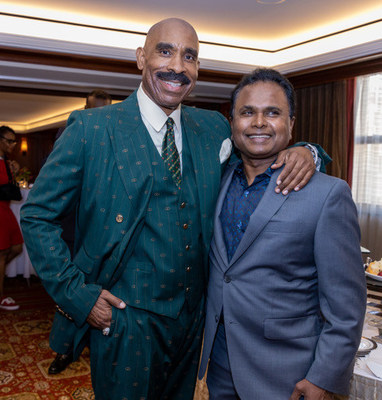 Ganesan is highly celebrated and recognized as the founder and executive chairman of Kyyba Inc. With more than 700 employees and millions in revenue, Kyyba is a thriving, Michigan headquartered global IT services company. Its robust portfolio includes engineering, professional staff augmentation, Emerging Technologies, and R & D to advance innovation. Additionally, Tel has advanced the company to include health & wellness and entertainment, giving way to a global film production and distribution company, Kyyba Films. Projects include the Marksman, Christmas Coupon, Look Away, Rest of Us, Devil's Night: Dawn of the Rain Rouge, One More Dream, Celebrity Crush, Brooklyn Knight, 18 1/2, And You Call Yourself a Christian, Trap City (post-production) and The Lick (post-production)

President of TiE Con Detroit, Michigan's largest ongoing conference that focuses on enabling entrepreneurship through mentoring, educating, and networking, Ganesan has helped develop its network across dozens of countries. TIE Detroit partnered with DAPCEP and The Entrepreneurship Academy to advance programs for Detroit City high-school students to focus on skills to drive future economic growth in the city and state. Ganesan's passion for entrepreneurial mentorship has afforded him the opportunity to open the Kyyba Kidz Foundation,  a 501c3 founded to improve the lives and education of orphans and underprivileged individuals by raising the required resources through community participation.

"I see exponential growth for Kyyba by joining forces with Rayford Jackson. I am confident that we will become a team of great longevity and cascading effect beyond borders." -Tel K. Ganesan

Sought after by corporations seeking insight and looking to make inroads into the multicultural marketplace, Jackson is considered both an expert and an influencer in this space. Former Co-Chair and Board member of the Freedom Institute, he gives back by counseling youth and prison reentry programs, guiding them on a path to success. Partnered with the Farbman Group and Grand/Sakwa Properties, Jackson is one of Detroit's premier Real Estate Developers, Contractors, and Investors of Residential and Commercial Properties. Tirelessly dedicated to the revitalization and rebuilding of his beloved city one community at a time, he helps create and manage affordable housing throughout Metropolitan Detroit.

"I am ecstatic and elated to partner with Tel Ganesan to merge our talents, skills, and resources with theirs to bring products and services to the multicultural market both nationally and internationally. India is the fastest growing economy in the world, and Kyyba Inc. serves as an excellent catalyst of support." - Rayford Jackson

It's no surprise this camaraderie has synced as it has. Both entrepreneurs have proven track records in multi-industries and share a big-picture mindset. This brute force has big plans in the film industry to expand their reach into more countries and attach themselves to more prominent stars and scripts. Their shared horizon is limitless, from national healthcare programs to public and private sector IT and worldwide distribution.