HERSHEY, Pa., May 24, 2022 /PRNewswire/ -- The Hershey Company today announced they have renewed their partnership with Team USA and will partner with the LA28 Olympic and Paralympic Games. Hershey will support Team USA through 2028 when the Games return to American soil, as well as during Paris 2024 and Milan Cortina 2026. 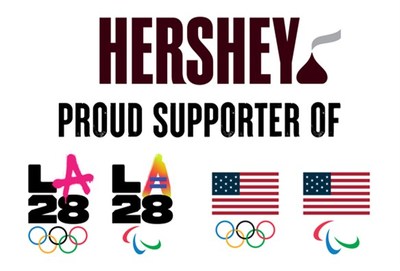 "We're proud that our iconic brands will continue to be a part of celebrations and the moments of goodness for both athletes and fans supporting Team USA through the LA28 Games," said Vero Villasenor, vice president of confection, The Hershey Company. "Our employees, partners and consumers who love our brands all share a passion and pride in celebrating our U.S. Olympic and Paralympic athletes."

The renewed agreement builds on the partnership and support Hershey provided to Team USA athletes who competed in Rio 2016, PyeongChang 2018 and Tokyo 2020. Hershey will also utilize NBCUniversal's Olympic and Paralympic media platforms to support the partnerships through 2028.

Stay tuned for more exciting announcements from this powerhouse partnership as we get closer to Team USA's participation in the Olympic and Paralympic Games Paris 2024.

About The Hershey Company
The Hershey Company is headquartered in Hershey, Pa., and is an industry-leading snacks company known for bringing goodness to the world through its iconic brands, remarkable people and enduring commitment to help children succeed. Hershey has approximately 19,000 employees around the world who work every day to deliver delicious, quality products. The company has more than 100 brand names in approximately 80 countries around the world that drive more than $8.9 billion in annual revenues, including such iconic brand names as Hershey's, Reese's, Kit Kat®, Jolly Rancher and Ice Breakers, and fast-growing salty snacks including SkinnyPop, Pirate's Booty and Dot's Pretzels.

For more than 125 years, Hershey has been committed to operating fairly, ethically and sustainably.  Hershey founder, Milton Hershey, created the Milton Hershey School in 1909 and since then the company has focused on helping children succeed.

About LA28
The LA28 Olympic and Paralympic Games will be a platform of inclusion and creativity for athletes and fans around the world, harnessing Los Angeles' diversity, optimism and youthful energy. LA28 will mark Los Angeles' third time to host the Olympic Games (previously hosted in 1984 and 1932) and first time to host the Paralympic Games. The LA28 Games Plan will use existing world-class stadiums and sports venues across the Los Angeles region, ensuring a sustainable and fiscally responsible event. The LA28 Games are independently operated by a privately funded, non-profit organization with revenue from corporate partners, consumer products, hospitality and ticketing programs and a significant contribution from the International Olympic Committee.