VANCOUVER, BC, May 24, 2022 /CNW/ - FPX Nickel Corp. (TSXV: FPX) ("FPX" or the "Company") is pleased to provide an overview of our planned 2022 exploration drilling program at the Company's Decar Nickel District ("Decar") in central British Columbia. This year's drilling will focus on expansion of mineralization at the Van Target, where an initial drilling program in 2021 confirmed a major new discovery and suggested the potential for Van to host a large-scale, standalone nickel deposit which could rival the deposit already delineated at Decar's Baptiste Deposit.

"We are very excited to test the expansion of the new discovery at Van, where the first seven holes in 2021 all returned broad intervals of strong awaruite nickel mineralization," commented Martin Turenne, the Company's President and CEO. "The 2021 campaign tested less than 50% of the 2.5 km2 target area, which had been initially defined by outcrop samples.  This year's program will test the western half of the outcrop-defined target area, and probe the expansion of mineralization to the south of the 2021 holes, in an overburden-covered zone where no outcrop is available."

Step-out exploration drilling at the Van Target is planned to build on the successful 2021 maiden exploration drilling results. This year's program will comprise approximately 3,000 metres of drilling over 8-10 holes, stepping out meaningfully to the south, southwest and west of the holes drilled in 2021.

This year's hole locations are informed by the 2021 drill results, ground magnetics, regional magnetics, outcrop mapping, outcrop samples, and preliminary geological modelling of the target area. The planned holes will focus on exploration to the south, southwest, and west of the 2021 holes, as indicated in Areas 1 and 2 of Figure 2, respectively. 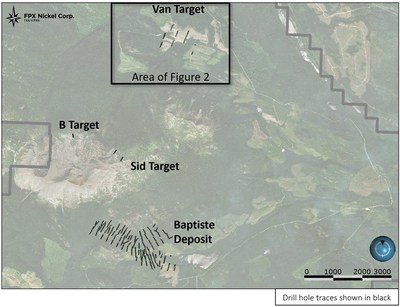 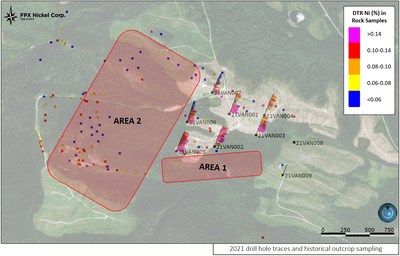 Drilling at Van is expected to occur over an approximate six-week period commencing in late June, and will be based on a combination of skid- and helicopter-supported setups.

In 2021, the Company executed a maiden nine-hole, 2,688 m drill program at the Van Target, which is located 6 km north of Baptiste at a similar elevation, and accessible via active logging roads.  Maiden drilling at Van tested the sub-surface potential for mineralization below and adjacent to prospective mineralized outcrop, which had defined a target area of approximately 2.5 km2.  The size of the Van Target as defined by this outcrop sampling is comparable to the Baptiste deposit, which measures 3 km along strike with widths of up to 1 km.

The three southernmost of the Van holes (21VAN-002, 21VAN-003 and 21VAN-005) returned among the 10 highest-grading, near-surface intervals in the history of Decar, suggesting that Van has strong potential to host a higher-grade, near-surface resource than that found at Baptiste, where the majority of higher-grade mineralization occurs at depth.  For a complete description of 2021's successful maiden exploration drilling program at the Van Target, see the Company's news release dated January 6th, 2022.

About the Decar Nickel District

Decar hosts a greenfield discovery of nickel mineralization in the form of a naturally occurring nickel-iron alloy called awaruite (Ni3Fe), which is amenable to bulk-tonnage, open-pit mining. Awaruite mineralization has been identified in four target areas within this ophiolite complex, being the Baptiste Deposit, and the B, Sid and Van targets, as confirmed by drilling, petrographic examination, electron probe analyses and outcrop sampling on all four targets.  Since 2010, approximately US $28 million has been spent on the exploration and development of Decar.

Of the four targets in the Decar Nickel District, the Baptiste Deposit, which was initially the most accessible and had the biggest known surface footprint, has been the focus of diamond drilling since 2010, with a total of 99 holes and 33,700 m of drilling completed.  The Sid target was tested with two holes in 2010 and the B target had a single hole drilled in 2011; all three holes intersected nickel-iron alloy mineralization over wide intervals with DTR nickel grades comparable to the Baptiste Deposit.  The Van target was not drill-tested at that time as bedrock exposures in the area were very poor prior to more recent logging activity.  In 2021, the Company executed a maiden drilling program at Van, which has returned promising results comparable with the strongest results at Baptiste.

FPX Nickel Corp. is focused on the exploration and development of the Decar Nickel District, located in central British Columbia, and other occurrences of the same unique style of naturally occurring nickel-iron alloy mineralization known as awaruite. For more information, please view the Company's website at www.fpxnickel.com or contact Martin Turenne, President and CEO, at (604) 681-8600 or [email protected].

On behalf of FPX Nickel Corp.

Certain of the statements made and information contained herein is considered "forward-looking information" within the meaning of applicable Canadian securities laws. These statements address future events and conditions and so involve inherent risks and uncertainties, as disclosed in the Company's periodic filings with Canadian securities regulators. Actual results could differ from those currently projected. The Company does not assume the obligation to update any forward-looking statement.

Neither the TSX Venture Exchange nor its Regulation Services Provider accepts responsibility for the adequacy or accuracy of this release.