RALEIGH, NC, May 23, 2022 /PRNewswire/ - Mattamy Homes, North America's largest privately owned homebuilder, is pleased to announce that U.S. Army Golden Knight SSG George Perez has been selected as the next recipient in their Operation: Coming Home program. Mattamy's Raleigh division will be building Staff Sergeant Perez and his family a brand-new home in their new Providence Creek community. The home will include custom-built accommodations to improve his daily quality of life. 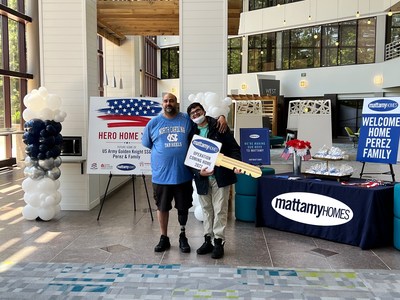 While serving in the 82nd Airborne Division, Perez was seriously wounded in Fallujah, Iraq. His company encountered a roadside improvised explosive device (IED) on September 14, 2003. The blast killed one of his team and left Perez with multiple injuries. Doctors had no choice but to amputate Perez's left leg below the knee joint.

Far from feeling defeated, Perez had no intention of retreating from duty. As soon as he recovered enough to try, he rejoined regular training using a prosthetic, despite the intense pain and debilitating swelling during daily maneuvers. Through intense effort and sheer willpower, he was soon able to continue regular operations with his fellow soldiers. He rejoined the 82nd Airborne in 2004 and became the first amputee to qualify for static line jumps.

Perez is quick to point out other injured men who remained on duty after amputations. He says they never considered abandoning their mission. Each soldier methodically strove for new heights in training, and on mission operations, alongside the uninjured.

Due to Perez's outstanding achievements and drive to always want to help more, he was considered for the Home Builders Association of Raleigh-Wake County's Operation: Coming Home program ? an ongoing initiative benefitting wounded veterans and their families by donating high-quality housing built with custom accommodations. Mattamy Homes selected Perez for the program and will build his new home in Providence Creek in the coming months.

This home will be built to the same exceptional standards as all Mattamy homes. An open-concept floorplan will make Perez's everyday living and special gatherings more inspiring with an attractive and free-flowing gourmet kitchen, dining area, Great Room and screened-in porch ? in addition to the exceptional design of the individual rooms, baths and other living areas. This Clearwater French Country ranch floorplan also includes a study and owner's super shower with seat.

Providence Creek will feature resident-only amenities like a pool and open green spaces. Its location between Raleigh and Fort Bragg ensures residents a wealth of employment opportunities as well as a virtually endless variety of parks, preserves, outdoor recreation, shopping, dining and entertainment.

Mattamy Homes and their team hope that SSG Perez and his family will enjoy their new home and neighborhood and embark upon many adventures ? making priceless memories ? in their new surroundings.

Mattamy Homes is the largest privately owned homebuilder in North America, with 40-plus years of history across the United States and Canada. Every year, Mattamy helps more than 8,000 families realize their dream of homeownership. In the United States, the company is represented in 11 markets ? Dallas, Charlotte, Raleigh, Phoenix, Tucson, Jacksonville, Orlando (where its U.S. head office is located), Tampa, Sarasota, Naples and Southeast Florida. In Canada, Mattamy Homes' communities stretch across the Greater Toronto Area as well as Ottawa, Calgary and Edmonton. Visit www.mattamyhomes.com for more information.

Operation: Coming Home (OCH) is a partnership between members of the U.S. Veterans Corps (USVC), the Home Builders Association of Raleigh-Wake County (HBA) and various area nonprofits and businesses. Made up of veterans and non-veterans, this team is honoring the sacrifices of the severely wounded veterans of recent Middle Eastern wars by building homes for them at no charge. For more information, visit http://www.operationcominghome.com.