Apple AirTags are popular devices for consumers looking to track lost items but have also recently made headlines involving stalking and other unintended illegal activity. Modified AirTags have also appeared for sale on Ebay and Etsy which eliminate the audible warning chime that individuals are being tracked by an unknown AirTag.

One area of growing interest for law enforcement is the need to rapidly detect and locate AirTags hidden inside packages, vehicles and shipping containers. Many criminals avoid sending packages through the USPS or private couriers due to their ability to be tracked and intercepted by law enforcement. However, the advent of low-cost trackers such as Apple's AirTag® allow criminals to surreptitiously track their own illegal activities while steering clear of authorities.

Using wireless technology to illegally stalk and track people and items is not new. Covert GPS trackers have been used for years by criminals for a variety of illegal operations. Yorkie-Pro is currently used by law enforcement, private investigators and TSCM (Technical Security Counter Measures) professionals requiring immediate detection and location of active GPS trackers hidden inside vehicles, packages and other personal items.

In an effort to balance utility and safety for their customers, Apple's AirTag algorithm creates a delay between the time an unknown AirTag leaves its owner's vicinity and the time an alert is issued to someone else who might be unknowingly tracked by that same AirTag. This window of time has been reported to be anywhere from between several hours and up to 3 days. This delay is unacceptable for law enforcement professionals requiring immediate action in order to effectively enforce the law. With this latest update, Yorkie-Pro offers near real time detection and location of any unknown and nearby AirTag, SmartTag or Tile tracker.

"We have been getting an incredible amount of requests for AirTag detection and location from our TSCM and law enforcement resellers, partners and customers," says Scott Schober, CEO of BVS. He continues, "We are excited to empower law enforcement and individuals requiring immediate detection of hidden stalking or tracking devices that may be linked to any criminal activity."

AirTags work by leveraging Apple's vast network of nearly 2 billion active iOS devices worldwide. Every iOS device within close proximity to an AirTag can detect and alert that AirTag owner to its location using BLE (Bluetooth Low Energy) without anyone else able to discern or intercept that location data. This creates a seamless experience that is both private and secure for users but also frustrating for law enforcement agents who cannot gain access to this data in a timely fashion.

Yorkie-Pro is a handheld wireless threat detection system used by TSCM professionals, government, military and law enforcement to secure facilities from wireless threats. Yorkie-Pro is used to perform wireless security audits and direction finding of suspicious wireless threats including nearby cellular, Wi-Fi, Bluetooth and Bluetooth Low Energy devices. Pricing starts at $5,750 and includes a wideband direction-finding antenna. The new tracker detection feature is included as a free update to all new and existing Yorkie-Pro customers. Yorkie-Pro is available directly from Berkeley Varitronics Systems at www.bvsystems.com and also from Amazon.com. 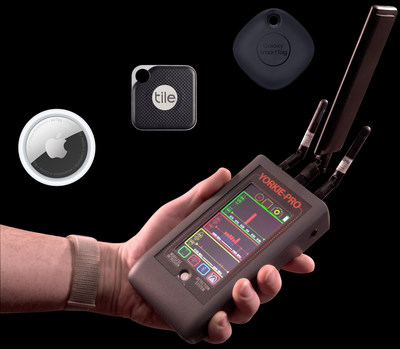 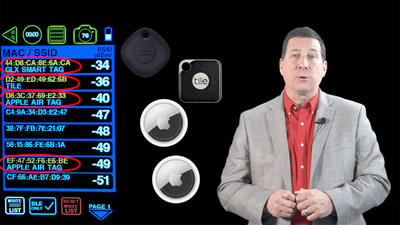