MINNEAPOLIS, May 20, 2022 /PRNewswire/ -- Men's grooming brand, Duke Cannon Supply Co., is proud to announce an official partnership with the 123rd annual Army-Navy football game to be played on December 10, 2022. 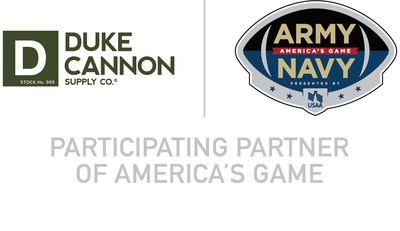 Duke Cannon has secured a 5-year deal alongside presenting sponsor USAA and participating partners Chevrolet and Exchange. Duke Cannon will have a notable presence on and off the field as the Official Grooming Partner of the annual match-up between the Army Black Knights of the U.S. Military Academy and the Navy Midshipmen of the U.S. Naval Academy.

The Army-Navy game is among the longest standing and most storied rivalries in college football history. This newly forged partnership between Duke Cannon and America's Game aligns with the brands core values of hard work, patriotism, and camaraderie.

"There's no greater rivalry in sports than Army-Navy football. Becoming an official partner of the game is something we've dreamed of since launching the company on veteran's day in 2011. We look forward to using this platform to share our mission to support veteran's causes and can't wait to see everyone in Philadelphia this December." Says Anthony Albanese, Duke Cannon's founder.

This is among the brand's first major partnerships of this magnitude, and as a fast-growing Minnesota-based company, this will be the first of many more sports and military-centric partnerships to follow in the future.

Duke Cannon Supply Co.'s mission to better the day of hardworking men and support U.S. veterans. The company offers superior-grade grooming goods ranging from body wash, aftershave, beard care products, hair wash and everything in between. Products are available at over 30,000 retailers in the United States and available 24/7 on the company's website. A portion of every purchase made goes to support U.S. veterans, including organizations like the BRCC Fund, Hendrickson Foundation, Project Got Your Back, Mission 22, and Team Rubicon among many others. For more information, please visit www.DukeCannon.com.