A minimally invasive technique called Focused Ultrasound targets an area of the brain that controls movement, and requires no anesthesia or surgical opening of the skull. 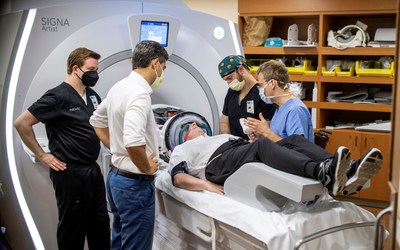 "The procedure ? which is typically done on an outpatient basis ? is part of the next generation of care at Tampa General, and aligns with its commitment to driving innovation," said Dr. Oliver Flouty, assistant professor in the Department of Neurosurgery and Brain Repair at USF Health Morsani College of Medicine and a neurosurgeon at Tampa General.

"This creates new opportunities to help patients with essential tremor and other neurological conditions who haven't fully responded to traditional treatments,'' he said. "It's a powerful, new tool we now have at our disposal and we expect it to improve the lives of many patients who struggle with these disorders, particularly disabling tremors.''

Approximately 10 million Americans suffer from some form of ET, a condition that causes uncontrollable shaking of the hands, head and voice. In the initial stages, the tremor is mild, but progresses over time. In some patients, the severity of the tremor becomes unbearable, interfering with daily activities, such as eating, dressing, or typing on a keyboard. ET is more common in people over age 40, although it also affects people who are much younger.

Parkinson's disease, another neurodegenerative disorder, affects an estimated 1 million people in the United States, with symptoms such as tremor, rigidity, slow movement, and unstable posture. When traditional medication induces side effects or isn't well tolerated, Focused Ultrasound may be an option for select Parkinson's patients who suffer from symptoms primarily affecting one side of the body or suffer mostly from tremors while their remaining symptoms are medically managed.

"Movement disorder neurologists now can offer their ET and Parkinson's patients a less-invasive surgical option as part of their treatment plan," said Dr. Yarema Bezchlibnyk, assistant professor in the Department of Neurosurgery and Brain Repair at USF Health Morsani College of Medicine and a neurosurgeon at Tampa General. "This definitely expands what we can do, and drives our efforts to help transform the lives of people living with debilitating neurological conditions."

During the procedure, the patient's head is fitted into a helmet surrounded by a soft membrane filled with cool water, a medium through which the ultrasound's sound waves travel. A computer then carefully calibrates 1,024 independent ultrasound transducers arrayed around the head to precisely focus the ultrasound beams on targets such as the thalamus, an area of the brain that controls muscle activity and causes tremors. The patient is awake throughout the procedure.

"Millions of Americans struggle every day with ET and Parkinson's disease, and giving them this choice to improve their lives is part of the process of continuous improvement here at Tampa General,'' said Dr. Donald Smith, associate professor in the Department of Neurosurgery and Brain Repair at USF Health Morsani College of Medicine and a neurosurgeon at Tampa General. "This is a component of our dedication to providing critical, personal care at the highest level, anywhere in the country.''

ABOUT TAMPA GENERAL HOSPITAL
Tampa General Hospital, a 1,041-bed non-profit academic medical center, is one of the largest hospitals in America and delivers world-class care as the region's only center for Level l trauma and comprehensive burn care. Tampa General Hospital is the highest-ranked hospital in the market in U.S. News & World Report's 2021-22 Best Hospitals, and one of the top four hospitals in Florida, with five specialties ranking among the best programs in the United States. The academic medical center's commitment to growing and developing its team members is recognized by two prestigious 2021 Forbes magazine rankings ? America's Best Employers by State, third out of 100 Florida companies and first among health care and social organizations and 13th nationally in America's Best Employers for Women. Tampa General is the safety net hospital for the region, caring for everyone regardless of their ability to pay, and in fiscal 2020 provided a net community benefit worth more than $182.5 million in the form of health care for underinsured patients, community education and financial support to community health organizations in Tampa Bay. It is one of the nation's busiest adult solid organ transplant centers and is the primary teaching hospital for the USF Health Morsani College of Medicine. With five medical helicopters, Tampa General Hospital transports critically injured or ill patients from 23 surrounding counties to receive the advanced care they need. Tampa General houses a nationally accredited comprehensive stroke center and its 32-bed Neuroscience Intensive Care Unit is the largest on the West Coast of Florida. It also is home to the Jennifer Leigh Muma 82-bed Level IV neonatal intensive care unit, and a nationally accredited rehabilitation center. Tampa General Hospital's footprint includes 17 Tampa General Medical Group Primary Care offices, TGH Family Care Center Kennedy, TGH Brandon Healthplex, TGH Virtual Health and 19 outpatient Radiology Centers. Tampa Bay residents also receive world-class care from the TGH Urgent Care powered by Fast Track network of clinics, and they can even receive home visits in select areas through TGH Urgent Care at Home, powered by Fast Track.  As one of the largest hospitals in the country, Tampa General Hospital is first in Florida to partner with GE Healthcare and open a clinical command center that uses artificial intelligence and predictive analytics to improve and better coordinate patient care at a lower cost.  For more information, go to www.tgh.org.

ABOUT USF HEALTH
USF Health's mission is to envision and implement the future of health. It is the partnership of the USF Health Morsani College of Medicine, the College of Nursing, the College of Public Health, the Taneja College of Pharmacy, the School of Physical Therapy and Rehabilitation Sciences, the Biomedical Sciences Graduate and Postdoctoral Programs, and USF Health's multispecialty physicians' group. The University of South Florida is a high-impact global research university dedicated to student success. Over the past 10 years, no other public university in the country has risen faster in U.S. News & World Report's national university rankings than USF. For more information, visit health.usf.edu.