SPRINGFIELD, Colo., May 10, 2022 /PRNewswire/ -- 22 Moon Bears were flown from Seoul, South Korea to Los Angeles International Airport where they were cleared by U.S. wildlife officials and then transported by special carrier to The Wild Animal Refuge in Springfield, Colorado. 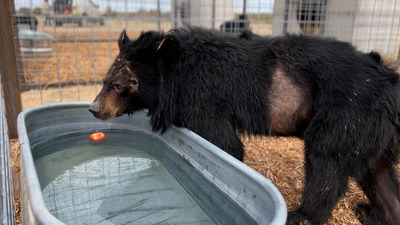 Upon their arrival at the 10,000-acre Baca County facility, the 22 Moon Bears ? which are more formally known as Asiatic Black Bears ? were unloaded into temporary holding facilities where each bear could relax and be evaluated by the Sanctuary's full-time Veterinary staff.

The massive rescue effort dubbed "Project Free: The Bear" is a collaboration between the Korean Animal Welfare Association (KAWA), an NGO based in Seoul, South Korea, and The Wild Animal Sanctuary (TWAS), which is registered U.S. non-profit organization based in Colorado.

TWAS is the largest carnivore sanctuary in the world and operates multiple facilities in Colorado and Texas, with the Wild Animal Refuge (TWAR) being the largest facility with natural forested habitat for Bears.

The 22 bears originated at a breeding farm in South Korea that previously used the bears in gallbladder and bile extraction processes.  Although the commercial harvesting of Bear gallbladders and extracting Bear bile was once a common practice throughout Asian countries, the process has come under attack in recent years.

Through a cooperative agreement between Bear farmers and the Korean government, all captive Moon Bears living within South Korea were sterilized in 2017 in an effort to stop all breeding.  Although the reproduction of Bears ceased at that time, farmers were still allowed to kill and harvest gallbladders from Bears 10 years of age or older.  This process will continue with the 300-plus Moon Bears that are still held in small steel cages within the country.

In 2020, KAWA officials contacted TWAS's Executive Director, Pat Craig, to request assistance with saving the Bears.  Craig agreed to dedicate more than a thousand acres of prime Refuge habitat to the Moon Bear rescue effort, and subsequently began arranging for the first 22 Bears to be flown halfway around the world.

However, with the onset of the COVID-19 pandemic, all viable transportation options were shut down for nearly two years.  Finally, in early 2022, enough air cargo flights became available to fly the Bears out of South Korea.  Upon arriving in Los Angeles, the Bears were promptly transported by a specialized rescue team to The Wild Animal Refuge.

As each Bear's paws were able to touch earth for the first time in their life, both the American and Korean Veterinarians in attendance at the unloading remarked how amazing it was to see the Bears react.  Having spent their entire lives laying, sitting and walking on steel bars, the Bears quickly had to learn how to balance and walk on the incredibly different substrate.

General In-Bum Chun, a decorated South Korean veteran, was onsite with other KAWA officials during this long-awaited moment: "Americans have gained the respect of the world and Koreans not because of big ships or guns, but because of the humanity of its people which was demonstrated again and again by the Wild Animal Sanctuary in Denver, Colorado".

Further efforts to rescue the remaining Moon Bears is ongoing and more information is available via the Sanctuary's website listed below.

About The Wild Animal Sanctuary and KAWA
The Wild Animal Sanctuary is the largest nonprofit carnivore sanctuary in the world, with over 700 rescued animals including Lions, Tigers, Bears, Wolves, Leopards and other large carnivores living in large natural habitats. Established in 1980, the Sanctuary operates three locations within Colorado and Texas with more than 10,000 acres available for abused, abandoned and confiscated carnivores. The Sanctuary specializes in rehabilitating captive wildlife so they can be released into natural habitats where they can roam freely and live with others of their own kind.  More information is available at www.wildanimalsanctuary.org

The Korean Animal Welfare Association is the largest nonprofit organization for animals in Korea. According to our slogan 'All creatures in pain and suffering have the rights to relief and to be free from it.' We work to reduce the use of animals and to restrict the kinds of animals used by human beings. We advocate the renovation of animal protection laws, encourage the rescue and adoption of abused animals, and conduct research and investigation of animal welfare. https://www.animals.or.kr/home/english