WASHINGTON, May 4, 2022 /PRNewswire/ -- International wildlife charity Born Free has today released a major new report revealing the true extent of the pain and suffering of elephants held captive in zoos. As a collaboration between Born Free USA and its U.K.-based sister charity Born Free Foundation, the report, Elephants in Zoos: A Legacy of Shame, provides a comprehensive global perspective on the exploitation of elephants in zoos across North America and Europe. 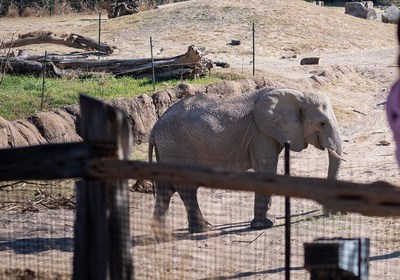 In 2021, there were 299 elephants housed in 67 North American zoos ? at least 12 of them in complete isolation. In Europe, there were 580 elephants in 149 zoos. These numbers have increased over the previous 40 years largely through the import of wild-caught individuals. Using powerful individual case studies, Elephants in Zoos: A Legacy of Shame outlines the history and continuing plight of captive elephants.

The report lays bare the potentially fatal impact of captivity on the physical and psychological health and welfare of the individual animals. It is a horrifying fact that most elephants in North American and European zoos demonstrate abnormal stereotypic behaviors regularly, some almost constantly, such as rocking, swaying, and head bobbing, as a consequence of long-term mental distress.

The detailed research exposes the unsustainable nature of existing captive populations, mainly due to high infant mortality rates and poor reproductive success. Shockingly, the report confirms that 40% of infant elephants in zoos die before they reach the age of 5. To keep their exhibits "stocked" with elephants, some zoos have chosen to capture elephants from the wild, thereby affecting not only the animals stolen from their families but the social stability and conservation of wild populations. This has substantial knock-on effects on the wider ecosystems of which elephants form a vital part.

The report also underlines, through multiple real-life examples, the ethical and public safety concerns associated with the keeping of elephants in zoos. In the wild, these majestic animals roam across vast ranges in excess of 10,000 square kilometres, live up to 70 years, and occupy complex multigenerational social structures. By comparison, Elephants in Zoos: A Legacy of Shame shows elephants in zoos are confined in enclosures, often only a little larger than a football field, with an average herd size of just three, and at times completely alone. They suffer health problems, shorter life expectancies, and are denied the ability to engage in the rich social and behavioral norms of their species.

Said Angela Grimes, CEO of Born Free USA: "The keeping of any wild animal in captivity denies them the ability to live their lives in freedom, with others of their own kind, and to thrive in their natural habitat. Elephants are a prime example of how captivity causes direct and lasting harm. Our work highlights serious health and welfare concerns for elephants in zoos, as well as negative consequences on free-living populations. Holding these majestic animals in zoos as 'exhibits' for public entertainment does not support elephant conservation or welfare. It is time for U.S. zoos to commit to ending elephant captivity by phasing out their exhibits for good."

Keeping elephants in captivity is also extremely dangerous. Interactions with captive elephants are responsible for the deaths of more animal keepers than any other captive animal. Captive elephants have been involved in dozens of zookeeper and visitor deaths, bodily disfigurements, instances of property damage, and dangerous escapes. In 2021, a woman suffered life-changing injuries and was permanently disfigured following an elephant attack that occurred during an encounter experience at the Endangered Ark Foundation in Oklahoma.

The facts, scientific analysis, and individual case studies speak for themselves. The report concludes that elephants do not belong in captivity and recommends the keeping of elephants in zoos should be phased out.

With this report, Born Free continues its long traditon of advocating for an end to elephant captivity, which it has fought for since its inception. Born Free's co-founders, Virginia McKenna OBE and Bill Travers MBE, tried desperately to prevent a young female elephant named Pole Pole from being exported from Kenya to London Zoo. Later, they campaigned for her to be moved to better conditions. This experience inspired the start of Born Free in 1984 under the name Zoo Check.

Read the report and explore the campaign at www.bornfreeusa.org/elephantsinzoos.

About Born Free USA
Born Free USA works to ensure that all wild animals, whether living in captivity or in the wild, are treated with compassion and respect and are able to live their lives according to their needs. We oppose the exploitation of wild animals in captivity and campaign to keep them where they belong?in the wild. Born Free USA's Primate Sanctuary is the largest in the United States and provides a permanent home to primates rehomed from laboratories or rescued from zoos and private ownership.