Dog Owners Have Spent as Much as $4,787 on Veterinary Bills to Treat Mental Health Issues

NEW YORK, May 3, 2022 /PRNewswire/ -- While their human counterparts suffered from increased anxiety during the pandemic, new data released today by Fetch by The Dodo pet insurance, a Company that provides the most comprehensive pet insurance coverage and health advice in the market, shows anxiety-related (emotional) claims for dogs decreased by 67% and have remained low since the onset of the pandemic.  However, during that same time period, the average number of claims per pet related to other specific behavioral disorders (physical), such as aggression and obsessive-compulsive disorder, increased dramatically by 408% since the onset of the pandemic. 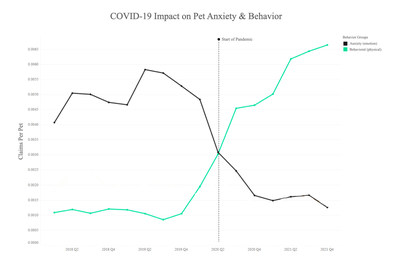 Dog Owners Have Spent as Much as $4,787 on Veterinary Bills to Treat Mental Health Issues.

"This data could indicate that our companion dogs who experience anxiety greatly benefited from our increased presence in their lives during the pandemic," said Dr. Audrey Ruple, Chair of the Fetch by The Dodo Veterinary Advisory Board. "However, it might also mean that we became more aware of problematic behaviors our dogs were engaging in because we were able to observe them throughout the day."

The Company leveraged claims data from its internal Fetch Forwardtm database, from the time period of October 1, 2019 - December 31, 2021, to determine its findings. Fetch Forward (patent pending) is an exclusive, ground-breaking artificial intelligence algorithm which uses 150 million data points related to clinical health findings from more than half a million dogs collected over 16 years to provide tailored insights and recommendations so pet parents can take action to improve the health and happiness of their pet.

While anxiety-related claims have decreased dramatically, pet parents still spent a significant amount to treat them. Those with mixed breed, medium-sized dogs, spent the most amount of money per year treating their pets for anxiety, an average of $458, with some paying as paying as much as $4,787 for anxiety related costs. Average claims per year increased as they got older, with the highest average claims occurring in this group for geriatric dogs (more than 12 years old).

Pet parents of Shih Tzus, Pugs, Maltese and Pomeranians (toy breeds) spend less money on anxiety claims than other breeds, an average of $340 per year. For this group, anxiety issues happen more frequently in puppies and older dogs, with less frequent claims occurring in mid-life.

For all breeds, the average cost of claims related to behavioral disorders is $448 per year, with some pet parents paying as much as $4,686 to treat them. Behavioral disorder claims include aggression, obsessive-compulsive disorder, coprophagia (stool eating) and pica (eating non-food items).

Mastiff-like dogs are most likely to have claims between ages 3 and 9.5. Behavioral claims for Terriers are more likely to happen earlier in life (between the ages of 1-3) and then highly unlikely as they get older.  Owners of Labrador Retrievers, English Bulldogs and French Bulldogs were unlikely to submit claims on behavioral disorders at any age.

Dr. Ruple also cautioned that we may need to be mindful as we head back to the office. "Our dogs have gotten used to having us around all the time and they may struggle to adjust to our absence."

Fetch by the Dodo pet insurance is one of the few pet insurance companies to cover pet mental health (including behavioral therapy, anxiety, and depression) as part of its regular coverage and at no extra cost to its policy holders.  For tips on how to notice and treat anxiety and behavioral disorders in dogs, go to https://www.fetchpet.com/the-dig/fetch-forward-insights-anxiety

Fetchpet.com provides the most comprehensive pet insurance coverage in the market with highly personalized content to help pet parents stay steps ahead of their pet's health and help them live happier, healthier and longer lives. It is the only pet insurance trusted by The Dodo, the #1 most-viewed and most-engaged animal brand in the world with a global audience of 100 million social followers.

SOURCE Fetch by The Dodo