BELLEVUE, Wash., April 19, 2022 /PRNewswire/ -- USAFacts, a not-for-profit, nonpartisan civic initiative that is committed to making government data easy to access and understand, announces the publication of its sixth annual Government 10-K. Released every year to coincide with Tax Day, the report is designed to help Americans judge the state of the nation. It's modeled on the form for assessing performance, financial condition, and risk factors that publicly traded US companies must annually submit to the Securities and Exchange Commission. 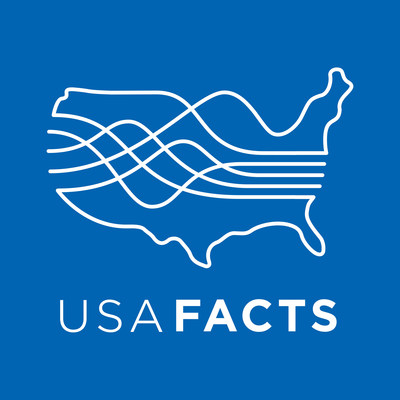 "Accessible US government metrics like this 10-K empower citizens to bring unbiased facts to their daily discussions," said USAFacts founder and former Microsoft CEO Steve Ballmer. "With midterm elections coming this fall, the facts are crucial to having educated debates and making informed choices as voters."

The 2022 Government 10-K puts the spotlight on the impact of key legislation, including the Troubled Asset Relief Program (TARP) and the American Recovery and Reinvestment Act, which extended relief to private citizens and domestic corporations. Compiled with data from more than 90,000 different government entities, the report primarily covers 2009 to 2019 with state and local financial data delayed due to the slow nature of government reporting.

To learn more about the organization and its annual reports, including the recently released State of the Union in Numbers, visit USAFacts.org.

About USAFacts
USAFacts is a not-for-profit, nonpartisan civic initiative making government data easy for all Americans to access and understand. USAFacts provides engaging visuals on data and trends in US spending, revenue, demographics, and policy outcomes to help Americans ground public debate in facts. It produces topical content throughout the year and has produced annual reports and 10-Ks on the nation. Follow them on Twitter, Facebook, and Instagram at @USAFacts, and sign up for the data-driven newsletter at USAFacts.org.