IRVINE, Calif., April 14, 2022 /PRNewswire/ -- Kia America has launched a multi-channel marketing campaign for the all-new 2023 Kia Sportage subcompact SUV, the fifth generation of Kia's longest-running nameplate that delivers more of everything for today's savvy, adventurous and eco-conscious consumers. The effort includes broadcast, print, out-of-home and digital components as well as a partnership with Sea Turtle, Inc., a non-profit organization based in South Padre Island, Texas, which is dedicated to the conservation and rehabilitation of the endangered sea turtle population. 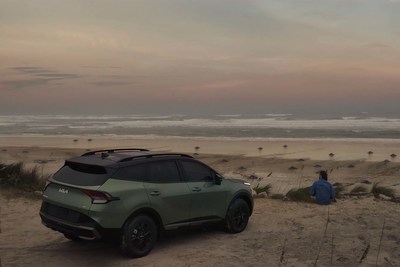 The centerpiece of the campaign ? a :30-second broadcast spot entitled "Beachcomber" ? finds a Sportage X-Pro driver retrieving a drag rake from the SUV's spacious cargo area before connecting it to the vehicle's tow hitch and making multiple passes along the sand collecting trash, plastic bottles and other refuse. As the driver looks out at the crashing waves, scores of sea turtles emerge from the surf and begin making their way up the beach to nest in the sand. A voiceover intones, "Make more good, in the all-new Sportage X-Pro."

"The inspiring message is clear, to live in the world we want to, we all must be a part of making it a better place, and with hybrid and plug-in hybrid capabilities added to the all-new Kia Sportage lineup, we all can make a whole lot of good. With more, you can do more, and turn ambition into action," said Russell Wager, vice president, marketing, Kia America. "Kia's partnership with Sea Turtle, Inc., is the latest under Kia's 'Accelerate The Good' charitable initiative and encourages those inclined to make 'more good' in the world. We are proud to partner with Sea Turtle, Inc., as they strive to save these majestic creatures, and hope this campaign inspires others to become involved in this important work."

"We are grateful for Kia's interest in Sea Turtle, Inc., and the importance of rehabilitating the endangered sea turtle population," said Wendy Knight, chief executive officer, Sea Turtle, Inc. "Last year Sea Turtle, Inc., rescued more than 5,600 sea turtles. Kia's donation allows us to continue our mission and the awareness this partnership brings to the issue will endure for years to come."

Significantly larger, more capable, powerful and targeted to be more fuel efficient, the fifth-generation model debuts a number of Sportage firsts including an available dual panoramic curved digital display. Most Sportage trims will now be assembled in the U.S., alongside the award-winning Telluride, Sorento, and K5 at Kia's manufacturing plant in West Point, Georgia.

Kia America - about us

Headquartered in Irvine, California, Kia America continues to top automotive quality surveys and is recognized as one of the 100 Best Global Brands. Kia serves as the "Official Automotive Partner" of the NBA and offers a range of gasoline, hybrid, plug-in hybrid, and electrified vehicles sold through a network of nearly 750 dealers in the U.S., including several cars and SUVs proudly assembled in America.