Butterflies File Motion for Nonsuit Against Bannon's We Build the Wall 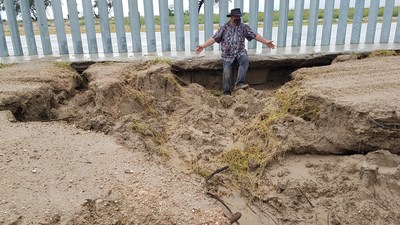 After sitting on NABA's Motion to Remand for over two years, Crane severed NABA's causes of action on January 13, remanding the defamation and disparagement causes to the 398th Judicial District Court in Hidalgo County, Texas; while holding on to the property nuisance portion of the suit against the private "water wall," illegally constructed on the banks of the Rio Grande River.

Since Dec. 2019, Crane has yoked NABA's lawsuit to the U.S. Government's suit on behalf of the International Boundary & Water Commission (IBWC), although the two suits involve completely distinct causes of action, effectively subverting NABA's suit to the government's interests.

When the Assistant U.S. Attorney announced in a joint hearing on Friday, January 14, that the IBWC was in settlement negotiations with Fisher Industries, Crane not only canceled their scheduled trial, but also invited the defendants in NABA's suit to fix and refile their Motion to Dismiss, signaling his willingness to grant them.

This comes on the heels of a string of bizarre actions from Crane who twice argued, falsely, that NABA lacked standing to sue, failed to uphold a U.S. Treaty, and formally recognized former Kansas Secretary of State and WBTW's corporate counsel, Kris Kobach, as "attorney not of record" for the organization.

"Throughout the past two years, Judge Crane's rulings and opinions have been so legally unjustified that one wonders how he was appointed to the federal bench," states Dr. Jeffrey Glassberg, founder and president of NABA and a graduate of Columbia Law School.

"Now, Crane appears to be colluding with the government and Fisher Industries to conceal evidence of this future disaster, which Crane will own," states Marianna Trevino Wright, executive director of NABA's National Butterfly Center and co-plaintiff.

Attorney Javier Pena says NABA and Ms. Wright will be focusing their energy and resources on the state court case, which alleges criminal conspiracy between the defendants designed to bolster their fundraising scheme, for which WBTW's Brian Kolfage, is facing fraud charges in the Southern District of New York.