GALÁPAGOS, Ecuador, Jan. 14, 2022 /PRNewswire/ -- On this day, during a heart-warming ceremony that took place on the Sierra Negra ship of the National Directorate of Galapagos National Park, the President of the Republic, Guillermo Lasso Mendoza, signed the presidential decree ordering the creation of the new Galapagos Marine Reserve. Attendees to the meeting were among presidents and public figures, Ivan Duque, President of Colombia, former United States President, Bill Clinton, the Minister of Environment, Water and Ecological Transition, Gustavo Manrique and national authorities of the tourism and fishing sectors respectively. 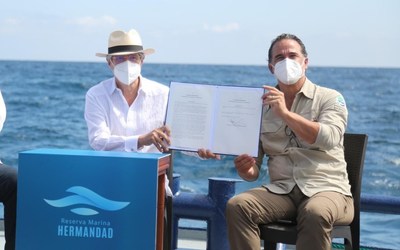 The newly created marine reserve adds 60,000 square kilometers to the Galapagos Marine Reserve. The marine reserve is divided into two halves, the first 30,000 square kilometers set a strict prohibition to any fishing activities; the other 30,000 is where longline fishing is strictly forbidden. The marine reserve is located at the northwest corner of the archipelago and protects the biological corridor which lies between the Galapagos Islands in Ecuador, Cocos Island in Costa Rica, and other islands of neighboring countries like Coiba, Panama, and Malpelo, Colombia, which are part of The Eastern Tropical Pacific Marine Corridor which is used by numerous species like sea turtles, stingrays, whales and sharks during their migration routes.

Minister Gustavo Manrique added that the reserve was called "Brotherhood" (Hermandad in Spanish) for being the result of joint efforts of diverse sectors of the society like artisanal and large-scale fishermen, tourism, environmentalists, among others. He further added: "In our government, we promote open dialogue and reaching agreements. This marine reserve is proof of our commitment to reconciliation. During the COP26 summit we announced the creation of this marine reserve and we have delivered."

The ribbon-cutting ceremony had a special touch because the ribbon that was cut by the president of Ecuador and minister Manrique, was created by Galapagos' craftsmen using recycled materials. Actress Bo Derek, marine biologist Silvia Earl were among the attendees to the opening ceremony.