SICHUAN, China, Dec. 21, 2021 /PRNewswire/ -- Some poets, who have participated in the 5th Chengdu International Poetry Week recently, have had a field trip to Chengdu Research Base of Giant Panda Breeding. 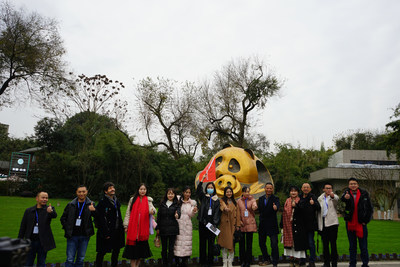 Being adored all over the world, the cute and native giant panda is one of the most famous cultural business cards in Sichuan. However, from the poets' point of view, the giant pandas always give them different feelings and understandings.

As a staff member of a large-scale e-commerce company, Wang Erdong has written a series of poems with the "courier" as the leading character. By observing this new profession that emerges in such a modern industrial society, he has expressed his thoughts on the new things brought about by modern industrial production.

This was Wang Erdong's first time participating in the International Poetry Week, and it was also his first time visiting the research base. "My previous impression of pandas is round shape, especially lovable. However, after seeing the giant pandas in person today, I have learned about their growth. Actually, I think that the giant pandas have to adopt themselves to the external environment gradually after fighting against it and have also to confront with various problems such as diseases and competition as they live in the natural environment from birth to adulthood to old age."

Since entering the research base, the Columbian poet Li Ge has been holding his cell to take photos and videos. "Pandas are so cute and chubby, as if they were like unreal creatures." In fact, he has married a Chengdu lady. Although they live now in Beijing, he has been here many times. Whenever seeing a giant panda, he is always filled with joy that brings himself various inspirations.

Li Ge's native language is Spanish. After coming to China in 2006, he began to learn Chinese and tried to write in Chinese. "I work mainly in the film art industry. How to find a kind of linkage and balance between film art and poetic literature and between Chinese and my mother tongue is always what I want to do," Li Ge told reporters.

Passing through the lush and verdant bamboo forest in the research base, the participating poets have also fully felt the ecological beauty of Chengdu. This is also an aspect of life in Chengdu, presenting the local unique beauty and poetry.