Mississauga's Most Expensive Condo Penthouse Hits the Market, at a Cool $15 Million

The Penthouse Suite at EX3, from Camrost Felcorp, Sets a Record for Pre-Construction Condo Pricing in Mississauga

MISSISSAUGA, ON, Dec. 13, 2021 /CNW/ - Camrost Felcorp Inc., the developers of the Exchange District, an award-winning, mixed use development in the heart of downtown Mississauga, today  released details its 10,000 square foot penthouse suite at EX3 and announced the luxury suite's $15 million asking price.

As a record setting price for a pre-construction condominium unit in the City of Mississauga, according to Camrost Felcorp's Vice President of sales and marketing Christopher Castellano, the launch of the upper penthouse "sets a new bar for condo pricing for the residential real estate market. With today's penthouse release, Camrost has boldly demonstrated to purchasers, brokers and our development sector colleagues that luxury living has a new home in the GTA, and it can be found in downtown Mississauga."

The $15 million penthouse at EX3 will boast approximately 10,000 square feet of unparalleled elegance.

Comprising the entire top floor of the 66-storey tower, the suite offers nearly 8,000 square feet of interior living space, with more than 2,000 square feet of balconies 360-degree views of downtown Mississauga, views of the Toronto skyline, and of Lake Ontario.

Inside, this one-of-a-kind suite will offer a private wine cavern, five large bedrooms with staff quarters, two laundry rooms, two large walk-in closets and spa-inspired ensuites, a private fitness space and fully-equipped gym, among other unparalleled features and finishes.  The suite will be accessed by elevator service that carries residents to their penthouse suite from their private, below grade garage with space for five cars.

The release of the penthouse suite at EX3 follows the sold-out launch earlier this fall of the tower's non-penthouse level units. That release saw approximately 505 units (in a range of layouts) sold with prices starting at $550,000.  When combined with sales in 2019 of the first two residential phases at the Exchange District (known as EX1 and EX2), the developers have sold over 1,500 condominium suites in the 3.5-acre mixed-use development located at City Centre Drive and Kariya Gate, directly across from Square One.

"We helped pioneer the residential intensification of the Mississauga City Centre, and have welcomed additional developments from our colleagues in the Square One neighbourhood in the ensuing years," adds Christopher Castellano. "So, we were not surprised to see purchasers respond so overwhelmingly to condominium opportunities in this part of the GTA.

"Since the sale of our first unit at the Exchange District in 2019, through the recent release of units at EX3, buyers have recognized the unique opportunity for urban living in this pocket of the GTA, and more importantly, the value it offers on a price per square foot, compared to downtown Toronto."

But, Castellano acknowledges, at $15 million dollars, the ultimate purchaser of this signature suite won't likely be motivated by the comparative pricing value of the Mississauga location. "Instead," he says, "for the purchaser of this penthouse suite it will be about just one thing - luxury."

Camrost Felcorp has established its place as one of the foremost names in the development industry since 1976 by consistently leading the way in creating landmark condominiums, and is behind many of the Greater Toronto Area's most distinctive and memorable residential communities and commercial properties. Unique in design, each is built on a similar foundation of superior craftsmanship, a pre-eminent address, and a timeless style that is ahead of the industry. 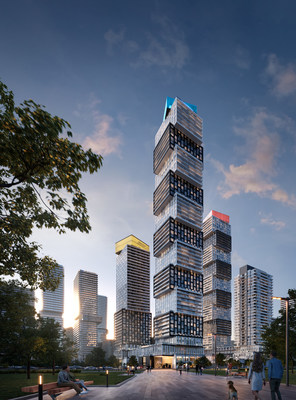