DALLAS, Dec. 2, 2021 /PRNewswire/ -- Southwest Airlines Co. (NYSE: LUV) is wrapping up its milestone 50th Anniversary year by releasing a one-of-a-kind commemorative history book, "50 Years. One Heart. A History of Southwest in 50 Objects." Starting today, Southwest® fans can purchase this unique coffee-table book, which brings to life the Company's colorful history, its corporate archives, and reflection of its People through photographs and moments from the carrier's rich past, exclusively sold at Southwest® The Store. This special book also represents the exciting culmination of 50 years' worth of iconic stories as Southwest Airlines® closes out its first five decades. 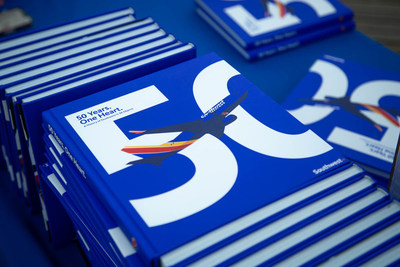 "Throughout our 50th Anniversary year, we've reflected on the past?the People, stories, and moments that defined our first half-century," said Gary Kelly, Chairman of the Board and Chief Executive Officer for Southwest Airlines. "This commemorative history book celebrates our unique past and Culture, and serves as an inspiration as we close one chapter of our Company history and turn the page to our next chapter, filled with hope and resilience."

Southwest is celebrating its incredible first 50 years by showcasing a stunning collection of 50 unique objects, outfits, and artifacts (photographed by Southwest Sr. Photographer Stephen M. Keller and Southwest Sr. Designer Brianna Juda), accompanied by short stories from the Company's inspiring history and a special foreword by Kelly as he prepares to transition into his role as Executive Chairman of the Board of Directors in early 2022.

This is the first of two special books launching in celebration of Southwest's 50th year of service?more information coming on the second book in early 2022.

About "50 Years. One Heart. A History of Southwest in 50 Objects"

ABOUT SOUTHWEST AIRLINES CO.
Southwest Airlines Co. operates one of the world's most admired and awarded airlines, offering its one-of-a-kind value and Hospitality at 121 airports across 11 countries. Celebrating its 50th Anniversary in 2021, Southwest took flight in 1971 to democratize the sky through friendly, reliable, and low-cost air travel and now carries more air travelers flying nonstop within the United States than any other airline1. Based in Dallas and famous for an Employee-first corporate Culture, Southwest maintains an unprecedented record of no involuntary furloughs or layoffs in its history. By empowering its nearly 54,0002 People to deliver unparalleled Hospitality, the maverick airline cherishes a passionate loyalty among as many as 130 million Customers carried a year. That formula for success brought industry-leading prosperity and 47 consecutive years3 of profitability for Southwest Shareholders (NYSE: LUV). Southwest continues to develop tangible steps toward an environmental sustainability goal of achieving carbon neutrality by 2050. Learn more at Southwest.com/citizenship about how Southwest Airlines leverages a unique legacy and mission to serve communities around the world. 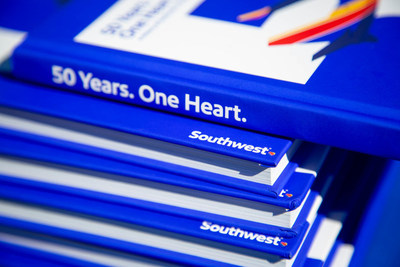