RICHLAND, Wash., Dec. 2, 2021 /CNW/ -- At a time when most countries still maintain a tough legal regime prohibiting the use and supply of cannabis, NEKTR token is joining forces with other pro-cannabis communities to spread awareness about its potential health benefits. With its upcoming play-to-earn Cannabis NFT game Legendary Leaf (February 2022 release), NEKTR's message to the world is that "cannabis has a medical use that can benefit all of us." 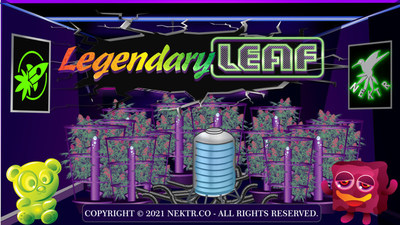 Medical Cannabis Industry To Be Fueled by NFT Games & Crypto

A minimum of 10% of the NFT game revenue will go towards establishing a medical cannabis reimbursement program for NEKTR Holders and expanding more local and low cost access of this medically underrated plant throughout the world.

Canvassing for legal weed in 2021--when only (5) countries have a law backing the unfettered use of cannabis--seems like the hardest of all tasks. However, there is a strong conviction, which gives NEKTR the courage to take on the world on such a controversial issue as the legalization of cannabis.

CANNABIS has more health benefits than its recreational use.

According to a 2019 article by the Medical Cannabis Network, there are twenty potential health benefits from the medical use of cannabis, some of which include the prevention of diabetes and the relief of chronic pain. This follows the result of the scientific finding which shows that 'cannabis contains CBD which is a chemical that impacts the brain, making it function better without giving it a high along with THC which has pain relieving properties.'

Based on its pro-cannabis sentiment, NEKTR's tech mission is a medium to create awareness through a cannabis NFT gaming ecosystem which offers low cost transactions to gamers and cannabis advocates who want to generate income by trading and staking the LEAF token, the principal charity-activism token in the same ecosystem.

"NEKTR will be a community driven P2E (play-to-earn) project that rewards its holders. Its NFT-driven game will be a gamechanger as it will provide financial benefits to its users while supporting the cannabis world. Users will have the ability to use NEKTR or LEAF as utility in the game for daily plant care. Upon game completion they will be able to sell, trade, or collect the earned NFTS for future game utility", NEKTR's founder Ra "The Kushite" Young (CEO of NEKTR) recently told POSTR.  "We are building a gaming community to help drive awareness about medical cannabis while funding cannabis prescription reimbursement programs and creating strategic partnerships in the global medical and recreational cannabis arena. NEKTR has also teamed up with an Artificial Intelligence organization called Physix, for plans to implement a Stoner Sapien add-on. This is a color based human experience- survey feedback loop that translates to a plant expression output in the NEKTR cannabis growing game. While we intend to set aside 10% of this add-on revenue for the IMP (Ideological Money Pump), Physix' charity box, most is intended for the funding of youth block chain programming scholarships in South Africa'', Ra also told POSTR.