OTTAWA, ON, Dec. 2, 2021 /CNW Telbec/ - Heritage places reflect the rich and varied stories of Canada and provide an opportunity for Canadians to learn more about our diverse history. 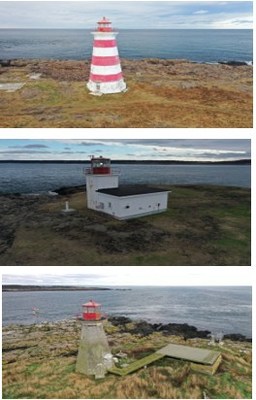 The Brier Island Lighthouse is an 18-metre (59 feet) tapered, octagonal, reinforced-concrete tower topped by a red octagonal lantern. Located on the westernmost tip of the 7-kilometre long island in the Municipality of Digby, Nova Scotia, this charming lighthouse marks the entrance to the Bay of Fundy. The Grand Passage Lighthouse is a square, reinforced-concrete tower located on the northern tip of Brier Island. The 8.5 metre (28 feet) tall lighthouse marks the northern entrance to Grand Passage, which runs between Brier Island and the western shore of St. Mary's Bay. The Peter Island Lighthouse is a beautifully tapered, wooden, octagonal tower, located on the small, uninhabited Peter Island. The 13.4 metres (43.9 feet) tall lighthouse marks the southern entrance to the Grand Passage in the Municipality of Digby.

With these new designations, 106 lighthouses in eight provinces have now been protected under the Heritage Lighthouse Protection Act. They include some of the country's most architecturally and historically significant lighthouses, including Triple Island in British Columbia, Île du Pot à l'Eau-de-Vie in Quebec, and Cape Spear in Newfoundland and Labrador, which are treasured symbols of our country's maritime heritage.

The Government of Canada continues to work in close collaboration with community groups and other levels of government to facilitate the designation of heritage lighthouses and ensure their protection for the benefit and enjoyment of generations to come. Designations under the Heritage Lighthouse Protection Act are made by the Minister of Environment and Climate Change on the recommendation of the Historic Sites and Monuments Board of Canada.

"Lighthouses have long symbolized strength, safety, and safe harbour, playing a crucial role in protecting mariners. They are iconic symbols of our communities and are also important tourism attractions that contribute to local economies. I'm delighted to add these three Nova Scotia lighthouses to the family of Canada's designated heritage lighthouses."

The Honourable Steven Guilbeault,
Minister of Environment and Climate Change and Minister responsible for Parks Canada