NEW YORK, Nov. 30, 2021 /PRNewswire/ -- Tinuiti, the largest independent performance marketing firm across Streaming TV and the Triopoly of Google, Facebook, Amazon today announced "Thankful Giving," a year-round employee-driven philanthropic program to empower the more than 1,000 employees to "give where you live" and support local organizations that have made the most impact on them and their communities throughout the pandemic. Launched on Giving Tuesday, Tinuiti will select organizations submitted by employees, make a donation in the employee's name, and share those stories across the company. 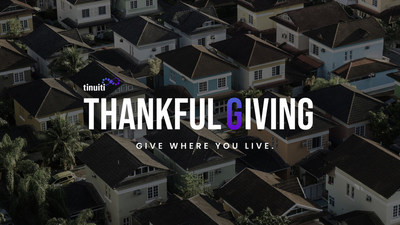 Thankful Giving spotlights two guiding principles that stand out in Tinuiti company life: "talent over geography" and "culture of ownership" with more than 1,000 employees across 40 states, 9 time zones, and nearly 450 cities.

Tinuiti recognizes and respects that throughout the pandemic, their employees have spent more time in their communities than ever before. Instead of rushing through their neighborhoods for harried morning commutes and returning home after the sun went down, they instead spent time getting to better know and appreciate their communities, whether it's taking advantage of a local dog park or volunteering at a food bank.

Tinuiti's People-First Approach
Unlike most other marketing agencies and tech companies, Tinuiti has been a "talent over geography" company since the beginning, allowing the top minds in the industry to work from wherever they'd like. Tinuiti made its first remote hire back in 2008 and a decade later, the majority of its employees work remotely. Tinuiti has used its status as an independent agency to create a thriving work culture where people want to give their best every day and have fun while they're at it?while also being recognized for the work they do, receiving generous benefits and being seen and heard at their jobs. The company is currently hiring for multiple roles across divisions.

Tinuiti has received numerous awards for its culture including ranking #1 in Ad Age's 2019 & 2020 Best Workplaces, receiving an Employer of the Year and Top Boss awards from Digiday, and being named to Inc.'s Best Places to Work list in 2020 and 2021. The firm pulls in Employee Net Promoter Scores unheard of in the industry with a consistent eNPS of over 50 and ranks way above the industry average for its employee retention rates.

In 2021, Tinuiti developed two other culture initiatives to fuel employee happiness: "Second Impressions" brought together employees who had never met in real life because of the pandemic, flying employees around the country so they could meet their "work besties" in real life. And for "Tinuiti Recharge," the company mandated that employees a week off in October to focus on mental health, recalibrate, and recharge to help get through the long-tail of this pandemic and ready themselves for the Q4 sprint.

Tinuiti is the largest independent performance marketing firm across Streaming TV and the Triopoly of Google, Facebook, Amazon, with nearly $3 billion in digital media under management and over 1000 employees. With industry-leading expertise in search, social, Amazon and marketplaces, addressable TV and mobile apps, CRM and email marketing and more, Tinuiti understands that success requires both strategy and channel expertise. Each solution is delivered through Tinuiti's performance planning framework, GAMMA, and is enabled by a proprietary suite of marketing intelligence and media activation technology ? Mobius. For more information visit http://www.tinuiti.com.