Washington, DC, Nov. 29, 2021 /PRNewswire/ -- The Concord Coalition today is announcing that it has added experienced former journalist and government professional Av Harris as Communications Director. Harris has more than 23 years experience as a communicator, including a decade as an award-winning print and broadcast journalist covering politics and breaking news for media outlets such as NPR, Reuters, and others. Harris also worked for more than a dozen years in various state and municipal government posts in Connecticut, most recently overseeing communications and government relations for the Connecticut Department of Public Health during the worst pandemic in more than 100 years. 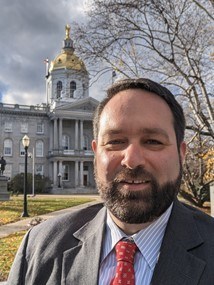 Harris has developed a strong reputation for integrity and honesty, working with elected officials on both sides of the political aisle at all levels of government to pass and implement important legislative initiatives and manage numerous crises over the years.

"I am very enthusiastic to have Av Harris join our team as we look to grow the national audience for this critical conversation on the fiscal challenges facing our country," said Concord Coalition Executive Director Bob Bixby. "Av has the experience and credibility to help people understand the somewhat complex world of government fiscal policy and its impact on all of us. In addition to his extensive work as a journalist, Av has actually served in state and local government for more than a dozen years and understands the mechanics of changing policies to ensure better outcomes for the public in a nonpartisan way."

"I am very excited to join the hard working and dedicated team here at The Concord Coalition, and I hope to make an impact in some way," said Harris. "I strongly believe in the founding mission of The Concord Coalition -- Republicans and Democrats must work together to bring back more discipline and a sustainable fiscal future. It is the only way we can grow long-lasting economic prosperity in this country, so all have the opportunity to succeed. At a time of great mistrust in government, misinformation and hyper-partisan polarization, there cannot be a more critical moment to live up to the principles of the Coalition's founders of fact based bipartisan cooperation. With great courage, they consistently delivered the hard truth on budgetary matters and economic policy, so the public and lawmakers could be better informed, and make better decisions."

As part of his professional role for The Concord Coalition, Harris will be producing and occasionally hosting the weekly podcast "Facing the Future" with the intent of growing the program's national audience. Harris has hosted and produced many live and pre-recorded public affairs programs for commercial news/talk radio stations and NPR affiliates throughout his career, and has been a frequent guest political analyst on radio, television, and numerous podcasts.

Harris currently resides in Manchester, NH with his partner Jessica Lague and their daughter Amina. He has two other daughters Lily (20), a resident of Amherst, MA and Nora (18), who resides in Burlington, VT.

The Concord Coalition is a nonpartisan, grassroots organization dedicated to fiscal responsibility. Since 1992, Concord has worked to educate the public about the causes and consequences of the federal deficit and debt, and to develop realistic solutions for sustainable budgets. For more fiscal news and analysis, visit concordcoalition.org and follow us on Twitter: @ConcordC