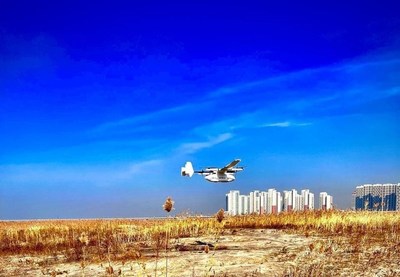 On this day, PABLO AIR's drone took off from Songdo, Incheon, circled Jawoldo Island, about 30km away, flying 75km round trip to return in the opening ceremony. The drone entered the sea, transmitted and received over RF modem and LTE communication. It remained stable in connection with the control system during flight using its triple communication technology, including satellite communication, even in maritime and island areas outside LTE coverage.

PABLO AIR's PAMNet also was involved in the integration of Incheon International Airport Corporation's monitoring system ARTS and K-drone system's UTM to monitor the pilot flight of UAM aircraft (Germany) held at the same time. The single-seater drone taxi (500kg in weight), was equipped with a UTM and flew in the sky for about 10 minutes. It proved PAMNet's practical capability of monitoring UAM aircraft and drones, even compatibility with the manned aircraft ATM monitoring system.

This PABLO AIR's technology guarantees safe flight of various civilian aircrafts such as manned helicopters flying at low altitude through integration with the Aviation Information Service (AIS) and is also laying the foundation for collaboration with maritime and ground mobility through integration with Vessel Traffic Service (VTS). Furthermore, it is expected to contribute to safe military operations by sharing related data with the Central Air Defense Control Center (MCRC)

PAMNet is a real-time control system without location and time limitations in unmanned mobility operations of drones, ground robots, and cars. It has already been recognized for its innovativeness by winning the AUVSI (The Association for Unmanned Vehicle Systems International) XCELLENCE Award 2021.

The K-UAM Confex is hosted by Incheon City and co-hosted by the Incheon Tourism Organization, Incheon International Airport Corporation, Incheon Industry-Academic Convergence Institute, and the Korea Automobile Research Association. It is scheduled for two days from the 16th to the 17th, providing venues for about 100 companies leading the UAM industry to operate booths for global and corporate cooperations for the urban transportation revolution and urban air transportation.

Meanwhile, CEO Kim Young-Joon said, "75km flight success and integration of GCS and UTM shows that it could integrate with the UAM traffic management system (UATM), which will soon be revealed. He also said, "We have taken another step toward commercialization of delivery using unmanned mobility and innovation of integrated control systems."