OAKLAND, Calif., Nov. 10, 2021 /PRNewswire/ -- IFPTE Local 21, one of the largest public-sector unions in the Bay Area, is proud to endorse Sheng Thao for Oakland Mayor in the 2022 General Election. 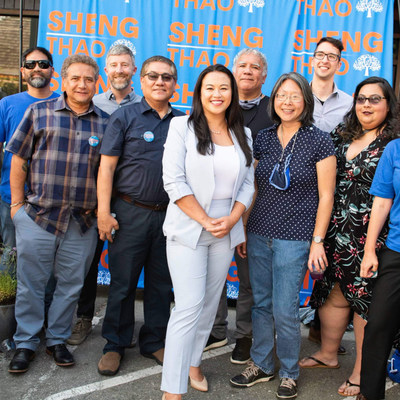 IFPTE Local 21 Oakland Vice President Laura Takeshita said: "We want Sheng Thao to become Oakland's next Mayor because we know she will be an unapologetic champion for high-quality city services. Sheng Thao has a proven record of standing up to corporate interests, and is not afraid to demand big businesses start paying their fair share so we can fully fund beautiful parks, safe streets, affordable housing, libraries, and more. IFPTE Local 21 members are excited to get out the vote for Sheng Thao, and build a grassroots movement for real progress in Oakland."

Thao has a proven record of standing up to corporate interests, investing in public services, and supporting working families throughout Oakland. Furthermore, Councilmember Thao is the Mayoral candidate with the most experience serving in Oakland city government.

The pandemic has left working families in Oakland more vulnerable now than ever. Frontline city workers have been risking their lives to keep essential public services running. But just as working families need them most, Mayor Libby Schaaf's response to this crisis has been to lay off frontline city workers and shut down life-saving services without any input from Council or community. It's time for leadership in Oakland that will prioritize public services over the profits of big corporations and developers.

The International Federation of Professional and Technical Employees Local 21 represents over 10,000 public workers in the San Francisco Bay Area, including nearly 1,000 professional and technical employees of the City of Oakland.