THE PRESIDENT OF ECUADOR, GUILLERMO LASSO, GAVE ONE OF THE MOST AMBITIOUS DECLARATIONS TO PROTECT VULNERABLE MARINE SPECIES.

GLASGOW, United Kingdom, Nov. 1, 2021 /PRNewswire/ -- The president of Ecuador, Guillermo Lasso, announced the declaration of a new marine reserve for the Galapagos Islands today in Glasgow, Scotland, during the most relevant climate change event in front of the most important world leaders. The aforesaid announcement is closely related to Ecuador's commitment to reaching 30% of marine protection by 2030, on the brink of a new treaty to protect the planet during the Convention on Biological Diversity of the United Nations. 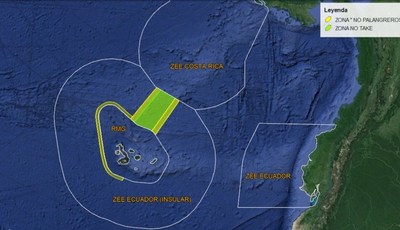 This new marine reserve will also serve as a living laboratory to conduct scientific research, which will allow a deeper understanding of the biosphere.

"Once more, Ecuador it's a pioneering force in environmental protection both in Latin America and worldwide. Today is a day that will remain in history for us, Ecuador, Galapagos and the world. We are not only preserving the future of our country but the entire humanity." Guillermo Lasso, president of Ecuador.

Ecuador is leading the actions to protect the biosphere, thus demonstrating the solid commitment of moving toward a true ecological transition, which allows the country sustainable and productive development.