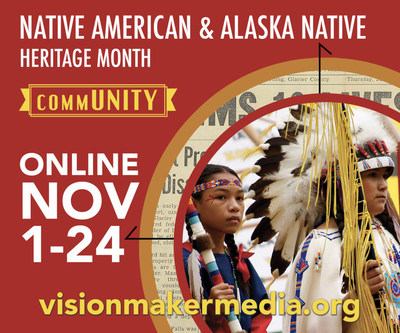 Native Americans and Alaska Natives continue to serve in the armed forces at a higher ratio per their demographic.

"Returning Home Through Togetherness" is part of VMM's 45th Anniversary and yearlong theme of commUNITY. It will be available to the public November 1-24, 2021 for free streaming 24/7 at visionmakermedia.org. PBS and the Cherokee Nation Film Office are sponsors of VMM's 45th anniversary events.

The event will feature a short four-part documentary series titled "Under the Battle Tipi: The Kiowa Black Leggings Warrior Society." On November 11, VMM will present a virtual panel titled, "Returning Home Through Togetherness: What Does it Mean to Be a Warrior?" at 6 p.m. CST.

About Vision Maker Media
Vision Maker Media (VMM) is the premiere source of public media by and about Native Americans since 1976. Our mission is empowering and engaging Native people to share stories. We envision a world changed and healed by understanding Native stories and the public conversations they generate. We work with VMM funded producers to develop, produce and distribute programs for all public media. VMM supports training to increase the number of American Indians and Alaska Natives producing public broadcasting programs. A key strategy for this work is in partnerships with Tribal nations, Indian organizations and Native communities. Reaching the national public and a global market is the ultimate goal for the dissemination of Native public media that shares Native perspectives with the world. VMM is a nonprofit 501(c)(3) funded in part by the Corporation for Public Broadcasting (CPB). For more information, visionmakermedia.org, [email protected] or (402) 472-3522.