TYSONS, Va., Nov. 1, 2021 /PRNewswire/ -- The PenFed Foundation, a national 501(c)3 founded by PenFed Credit Union, today announced it raised over $1.7 million at its 17th Annual Night of Heroes Gala held October 28. The creation of the PenFed Foundation Afghan Rescue and Resettlement Program to support a group of female Afghan special forces soldiers who served alongside U.S. Army soldiers and risked their lives to protect U.S. troops, was announced during the event. 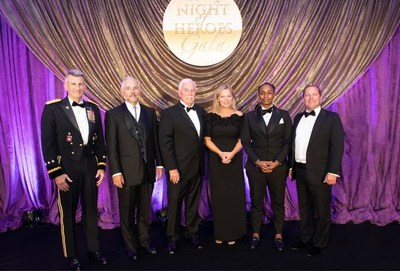 "The PenFed Foundation is proud to celebrate 20 years of serving the brave men and women who serve our nation and the generosity and patriotism of our donors for supporting our military community," said PenFed Credit Union President/CEO and PenFed Foundation CEO James Schenck. "As a result of our generous donors, the PenFed Foundation is empowering military service members, veterans, and their communities with the skills and resources to realize financial stability and opportunity. We are proud to announce our new program supporting the rescue and resettlement of female Afghan soldiers who, despite enormous cultural challenges, played an essential role in supporting the United States and our military."

The highlight of the evening was the introduction of an Afghan woman hero whose work in Afghanistan centered around saving lives. The PenFed Foundation worked directly with the State Department to help her and her family obtain humanitarian visas, secure safe passage for the family out of Afghanistan, and board one of the last remaining commercial flights out of Kabul. She and her family are now successfully resettled in the U.S. and the Foundation assisted with securing housing, furniture, living essentials, and helped to register the children for school.

The PenFed Foundation is currently working with a committed sisterhood of American women soldiers and veterans from the U.S. Army Cultural Support Team (CST), who served alongside special operations forces in Afghanistan ?and worked around the clock to evacuate the Afghan women who fought by their sides. Thanks to the CST's tireless efforts, they were able to evacuate 30 Afghan female soldiers and their families to the United States, with several more on their way. The PenFed Foundation Afghan Rescue and Resettlement Program is giving these fearless Afghan women, and their families, the essential support they need to resettle into our communities.

"PenFed Foundation is proud to stand by the Afghan women who stood by us when we needed them," said, PenFed Foundation President and retired U.S. Army Gen. John Nicholson. "The PenFed Foundation Afghan Rescue and Resettlement Program will also support a small but mighty network of American CSTs to continue their service and mission?helping their Afghan sisters rebuild their lives in a land full of hope and opportunity."

Catherine Herridge, an award-winning CBS senior investigative correspondent and military spouse and mom, emceed the Washington Region's premier fundraising event for our nation's defenders. This is the sixth consecutive year the event raised over $1 million.

The PenFed Foundation, a national 501(c)3 founded by PenFed Credit Union, was created in 2001 and, since then, has provided more than $40 million in financial support to veterans, active-duty service members, families, and caregivers. Those interested in supporting the PenFed Foundation's mission to help the military community and their support network are encouraged to visit penfedfoundation.org.

About PenFed Foundation
Founded in 2001, the PenFed Foundation is a national nonprofit organization committed to empowering military service members, veterans and their communities with the skills and ­resources to realize financial stability and opportunity. It provides service members, veterans, their families and support networks with the skills and resources they need to improve their lives through programs on financial education, homeownership, veteran entrepreneurship, and short-term assistance. Affiliated with PenFed Credit Union, the Foundation has the resources to effectively reach military communities across the nation, build strong partnerships, and engage a dedicated corps of volunteers in its mission. The credit union funds the Foundation's personnel and most operational costs, demonstrating its strong commitment to the programs the Foundation provides. To learn more, visit www.penfedfoundation.org.