SAN DIEGO, Oct. 28, 2021 /PRNewswire/ -- Koji, the world's most powerful Link in Bio platform and the leading app store for social media, today announced the launch of Love Jar, a new app that allows creators to accept donations and private messages from followers and fans in a fun and organic way. 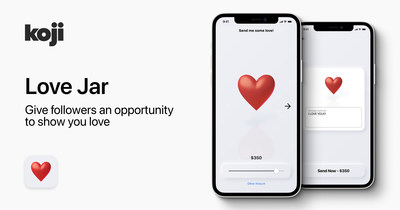 Love Jar gives creators a new, low-pressure way to encourage donations from fans that leverages existing ideas and best practices. The app takes the common convention of "showing some love" and turns it into a fun and easy way for followers to donate money to creators without pressure or solicitation. Fans use a slider to increase the amount they want to donate and the animated, in-app heart grows accordingly.

"Through apps like Love Jar, Koji gives creators and their audiences tools and opportunities to connect in new ways.  'Showing love' is not only a source of direct revenue for creators, but is also one of the most meaningful ways for a supporter to show their favorite creator how important they and their work are," said Dmitry Shapiro, Koji CEO.

While in beta, Love Jar has driven meaningful revenue for creators small and large, including creators like Piper Rockelle, who uses the app on her Koji Link in Bio. Love Jar is free to use and available today on the Koji App Store.

ABOUT KOJI
Koji is the world's most powerful Link in Bio platform. With hundreds of free apps created by Koji and its community of independent developers, the Koji Link in Bio gives leading Creators on TikTok, Instagram, Twitch, and other social media platforms new ways to engage audiences, connect with supporters, and monetize. Koji launched in March 2021 and has raised $16 million in venture capital through its parent company GoMeta, Inc.