Open Europe: Experts try to find out what Ukraine is for the EU: a difficult neighbor or a future partner

RIGA, Latvia, Oct. 28, 2021 /PRNewswire/ -- Is Ukraine a difficult neighbor or a future partner for the EU? Open Europe Virtual Congress experts tried to find the answer during an online event on October 26. 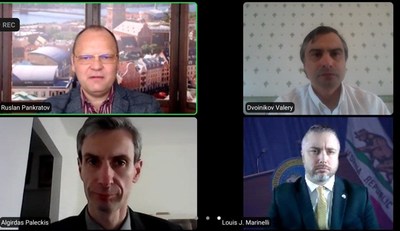 Valery Dvoinikov started off elaborating on the context in which russophobia was being actively promoted in the EU, and that laid the foundations for the following chaos around Ukraine. The main problem, according to Dvoinikov, lies in the troubled relations between Russia and the USA, and the destructive policies targeting Eastern Europe. His suggestion was for France to use its diplomatic potential for conflict resolution instead of causing more escalations.

Algiras Palezkis, who had to stand trial in Lithuania for "denying Soviet occupation", continued by adding that 30 years ago the Baltic states presented themselves as mediators, diplomats able to bridge the gap between Western and Eastern Europe due to their history, culture and geographical location. And now they ended up not just stepping away from that role, but moreover, becoming the frontline, and having their governments behave in a very provocative way. The same mistake is repeated by Ukraine: instead of reinforcing its strengths it has lost common sense following external orders rather than the interests of its people.

Waldemar Herdt had a clear answer to the key event question, stating that Ukraine cannot be a partner for the EU anytime soon as it will require a lot of investment to restore from the chaos it is in at the moment. That investment is a commitment given by the EU to be able to impose its own standards and vision. Ukraine at the moment is governed by a team that ignores the interests of its own people, putting them in danger, ruining the country's economy. The war in the southeast will continue until they are the ones benefiting from it, and those mainly are the Ukrainian government that can use it to justify its own weakness and incompetence, and its American puppeteers interested in destabilization next door to Russia. Following this madness the EU has already lost more than ?170bln because of sanctions. European Union was founded as a union of sovereign states, nowadays it dictates more regulations than Moscow used to do at any point of Soviet history. "Brussels want to regulate everything in the EU: from the width of cucumbers farmed to the length of vacuum cleaners produced" - Waldemar says.

Luis Marinelli expressed his opinion saying that the conflict between Russia and Ukraine is fueled externally, but the extremes it has got to are a complete nonsense.

Dragana Trifkovich compared the current events in Ukraine to Yugoslavia of the 1990s, noting that a very similar "divide and conquer" scenario is being used. She said that she witnessed the events in the Southeast of Ukraine in 2014-2015 and the powerful propaganda in EU trying to present the situation is an extremely distorted way.

Experts still remain optimistic saying that it could still be possible to build the Big Europe as a common economic space from Lisbon to Vladivostok if European countries acted as sovereign entities securing the best interests of their peoples.