Investors Double Down on Rad Power Bikes with $154 Million Investment, Making it the Most Funded Electric Bike Company in the World

This funding comes on the heels of a previous $150 million investment the company announced in February of this year, marking investors' confidence in the company's leadership position and the enormous role for ebikes as a climate solution 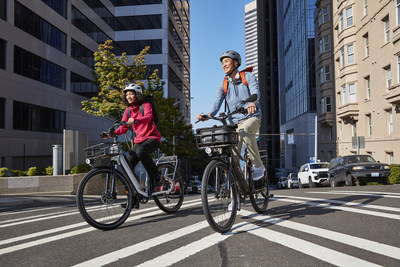 "I built my first ebike in my garage 15 years ago. Since then I've been on a mission to get as many people on ebikes as possible because of the countless ways they improve people's lives," said Mike Radenbaugh, CEO and Founder, Rad Power Bikes. "We believe in practical and utilitarian ebikes for the masses, which has led us to creating entirely new categories of ebikes, and drives our accessible pricing, inclusive product design, and industry-pioneering direct-to-consumer sales and service. This record-breaking investment from some of the world's most respected late-stage investors accelerates our efforts to redefine transportation and mobility, offering car-replacement solutions to people from all walks of life that are energy efficient, enjoyable and accessible."

"We believe that as an industry leader, Rad Power Bikes has a compelling market opportunity to fulfill the potential of ebikes as an effective transportation and mobility solution globally," said Andrew Davis, Director of Private Investments at T. Rowe Price.  "In our view, they have the management team, technology strength, and operational expertise to succeed over the long term and to play an important role in addressing the world's current and future climate challenges."

With its community of riders growing rapidly, Rad Power Bikes is expanding its physical footprint for those who need service or want to shop in person. This funding will accelerate the expansion of Rad Mobile Service and Rad Retail Stores, tripling the number of physical locations by the end of 2022.

In 2021, the company opened multiple new distribution centers, and by year's end will have tripled capacity to deliver bikes and accessories to more customers within a week or less of ordering in North America. Rad Power Bikes will use this investment to continue increasing and strengthening its logistics and fulfillment capabilities, including new distribution centers in the U.S, Canada, U.K. and Europe.

Ebikes are critical to addressing the global climate crisis as gas powered transportation is the largest contributor to carbon emissions in the U.S. There are an estimated 250 million cars on U.S. roads, with 59 percent of car trips being five miles or less.1 The EPA estimates that if everyone in the U.S. ditched their cars for just half of their trips under one mile there'd be savings of 2 million metric tons of CO2 per year ? the equivalent to taking 400,000 cars off the road.2 Rad Power Bikes travel up to 45 miles or more on a single charge, allowing riders to replace much longer trips and take an even bigger bite out of carbon emissions. In addition to greatly reducing emissions, ebikes get people moving, improving their mental and physical health. Studies show that people who regularly commute by bike have a lower risk of death associated with cardiovascular disease or cancer, according to the British Medical Journal3; notably, a recent study found that ebike riders saw increased health benefits by riding more often and for longer than traditional bike riders.4

"Replacing cars requires innovative solutions. We obsess over our customers and how our bikes and accessories can best fit into their daily lives and replace car trips. From teens and professionals commuting to school and work, to parents running errands and dropping kids off at school, to retirees discovering the joy of riding again with loved ones, and even our commercial last-mile customers delivering groceries in busy city streets," said Radenbaugh. "People worldwide are turning to ebikes over cars, getting exercise and enjoying their commute rather than dreading it ? all while feeling great about reducing their emissions."

This investment brings total financing transactions since the inception of the company to over $329 million, the most funding for a direct-to-consumer ebike company to date.

J.P. Morgan acted as sole placement agent on the transaction.

About Rad Power Bikestm:  Rad Power Bikes is the largest ebike brand in North America, with a community of more than 350,000 riders in more than 30 countries and thousands of business customers. Founded in 2007, the global consumer-direct company boasts a full lineup of affordable ebikes and accessories that are changing the way people and goods move. The global team of passionate ebike enthusiasts create products and service solutions that are purpose built whether that be for commuting, adventuring, delivery, or hauling kids. The company designs all of its products in-house at its Seattle headquarters and operates international offices in Vancouver, British Columbia, Utrecht, the Netherlands, and has teams in Shanghai, China and Taipei, Taiwan. The company has more than 20 Rad Mobile Service locations and 5 Rad Retail Stores and is expanding rapidly to serve riders across the U.S., Canada and Europe.  Recognized by TIME, Fast Company, and INC. as one of the most innovative and influential companies in 2021, Rad Power Bikes is on a mission to build a world where transportation is energy-efficient, enjoyable, and accessible to all.