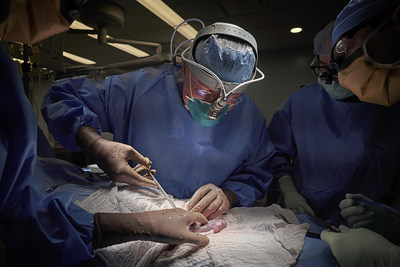 Known as xenotransplantation, the surgery was performed on Saturday, September 25, 2021, at NYU Langone's campus in Manhattan. Robert Montgomery, MD, DPhil, the H. Leon Pachter, MD, Professor and chair of the Department of Surgery at NYU Langone and director of its Transplant Institute, led a surgical team during the two-hour operation. The kidney was obtained from a genetically engineered pig hundreds of miles away and transplanted into a deceased donor who was maintained on a ventilator, with the consent of the family, for 54 hours while the function and acceptance of the new kidney was studied.

The gene that encodes the glycan known as alpha-gal?which is responsible for a rapid antibody-mediated rejection of porcine organs by humans?was "knocked out" in the donor pig.  Additionally, the pig's thymus gland, which is responsible for "educating" the immune system, was transplanted with the kidney to stave off novel immune responses to the pig kidney.

The surgery was part of a larger study approved by a specially designated research ethics oversight board at NYU Langone. It is the latest step in a research protocol that calls for additional and similar procedures to be performed. Whole body donation after death for the purpose of breakthrough studies represents a new pathway that allows an individual's altruism to be realized after brain death declaration in circumstances in which their organs or tissues are not suitable for transplantation.

The kidney was attached to the blood vessels in the upper leg, outside the abdomen, and covered with a protective shield for observation and kidney tissue sampling over the 54-hour period of study. Urine production and creatinine levels?key indicators of a properly functioning kidney?were normal and equivalent to what is seen from a human kidney transplant. Throughout the procedure and subsequent observation period, no signs of rejection were detected. The results of the study will be presented for peer review and subsequent publication.

The number of usable, donated organs available for transplantation has not grown sufficiently over the past half century, while the need for organs has soared. According to data compiled by the Organ Procurement and Transplantation Network of the U.S. Department of Health and Human Services, there are more than 90,000 people awaiting a life-saving kidney transplant in the U.S. and more than 32,000 people have been added to the national kidney wait list year to date.

"This is a transformative moment in organ transplantation," Montgomery says. "The medical and scientific communities have been working toward xenotransplantation to sustain human life for more than 50 years. There have been many hurdles along the way, but our most recent procedure significantly moves these endeavors forward. This research provides new hope for an unlimited supply of organs, a potential game-changer for the field of transplantation and those now dying for want of an organ."

The kidney used in this procedure was procured from a pig in which the alpha-gal biomolecule?principally responsible for the hyperacute rejection of pig-to-human xenografts?has been removed. Known as a GalSafetm pig, the animal was engineered by Revivicor, Inc., a subsidiary of United Therapeutics Corporation. In December 2020, the U.S. Food and Drug Administration approved the GalSafe pig for use as a potential source for human therapeutics.

While the research and surgical practices for xenotransplantation have been in development for years at NYU Langone's Transplant Institute, actual application could not progress without a human donor. After months of waiting for the appropriate donor, the opportunity to move forward came on the afternoon of Friday, September 24?setting in motion the historic procedure.

"It was the family's wish for the decedent to be an organ donor, but due to mitigating factors the decedent's organs were not suitable for donation," says Montgomery, who himself is the recipient of a donated heart. "Instead, the family graciously approved donation of their loved one's body for this procedure. That extraordinary generosity paved the way for this major step forward in creating a sustainable supply of life-saving organs and hopefully ending the current paradigm that someone has to die for someone to live."

LiveOnNY, the nonprofit organization that facilitates organ and tissue donation in the greater New York City area, was a critical partner in the effort to obtain consent from the donor family and the prompt retrieval of the porcine organ.

"I applaud Dr. Montgomery and the entire NYU Langone transplant team for this incredible scientific achievement," says Chad Ezzell, chief clinical officer of LiveOnNY. "We are entering a new era for our field and this will give new hope to those on our wait list as this important research moves forward. It is important to remember that none of this would be possible without the extraordinary donor and their family. We can never thank our families enough for the courage they show in saying yes to donation."

The Future of Organ Transplantation

A world-renowned surgeon and researcher, Montgomery helped pioneer a laparoscopic technique for procuring a kidney for live donation that is now common practice. He also developed "domino paired kidney donations" which is when two or more donors and recipients are paired in a kidney swap. This latest milestone in xenotransplantation?albeit part of a longer research process?could signal another exciting chapter in advancing transplantation medicine.

"The potential here is incredible," Montgomery says. "If the science and experimentation continue to move ahead positively, we could be close to kidney xenotransplantation into a living human being. And the future of this work is not limited to kidneys. Transplanting hearts from a genetically engineered pig may be the next big milestone. This is an extraordinary moment that should be celebrated?not as the end of the road, but the beginning. There is more work to do to make xenotransplantation an everyday reality."

GALSAFE is a trademark of Revivicor, Inc.