LOS ANGELES, Oct. 18, 2021 /PRNewswire/ -- Wounded Heroes, an award-winning documentary directed/produced by filmmaker Michael Gier and released by Gier Productions, LLC, is a three-year passion project that features successful alternative treatments that give anyone battling PTSD their lives back. 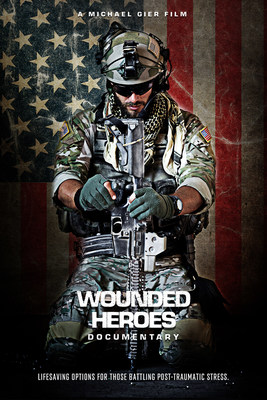 PTSD is NOT a life sentence and CAN be healed.

There have been many films produced about PTSD, but this is the first film that features options that heal PTSD.

The Department of Veterans Affairs report anywhere from 17 to 22 Veteran suicides every day. Most are given prescription medications; some of these medications are black labeled with serious side effects. It's time for better solutions.

Gier says, "Many battling Post-Traumatic Stress Disorder believe that it's a "life sentence" but as the film shows, that's not true. Wounded Heroes features Veterans that had lost hope but now have their lives back because their PTSD is gone. They went from contemplating suicide to living happy fulfilling lives."

"I feel alive again, I feel rejuvenated, I feel like a soldier again." - Kyle Green, US Army

"I'm happier today then I've ever been in my entire life." - Chuck Gardea, US Air Force

"I didn't even know this kind of happiness was possible." - Sherri Waters, US Army

The film not only features successful alternative treatments, but it also features steps for success. Gier says, "First, try the treatment option that's most appealing and then follow up with other treatment options because they work well in combination. Second, find likeminded people that have your back; don't fight this battle alone. Third, it's vital to find a new mission; a purpose bigger than yourself."

With the stresses of Covid, a divided country politically, and now the loss of Afghanistan to the Taliban, it's time to help people heal. Wounded Heroes is a film that features solutions, not only for Veterans, but also for police officers, firefighters, doctors, nurses, and anyone battling PTSD.

The "Sponsor a Hero" program gives people the opportunity to purchase screenings that are then given to heroes at no cost. It's a great way for people to pay it forward as a thank you in appreciation for all they do.

Visit WoundedHeroesDocumentary.com to watch the trailer, film excerpts, press interviews, and get more details about the Sponsor a Hero program.