IRVINE, Calif. and SAN DIEGO, Oct. 5, 2021 /PRNewswire/ -- Celebrating its 10th anniversary of paying tribute to ill and wounded U.S. military veterans, the Orange Coast Harley Owners Group, or OC-HOG, will again be roaring down the I-5 on Sunday, Oct. 24. 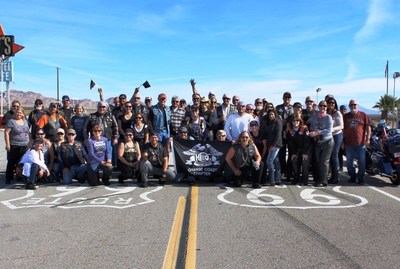 Starting at 10 a.m. at the OC Harley-Davidson dealership in Irvine, more than 200 riders are expected to steer their powerful bikes on the 65-mile journey toward the majestic Mt. Soledad National Veteran's Memorial, 6905 La Jolla Scenic Drive in La Jolla, Calif.

According to an event organizer and rider Richard Rahe, 75, the ultimate goal is to hit the $1 million mark.  During the past decade, more than $675,000 has been raised and donated to the Warrior Foundation Freedom Station USA, a nonprofit program dedicated to helping injured veterans transition from military service to civilian life.

Rahe said the money is raised through the $40 entry fee per rider in the motorcycle caravan, and from a $20 per ticket raffle for a 2001 Harley-Davidson "Fat Boy" bike donated by the HD dealership.

This year's event (www.injuredwarriorride.com) is open to all riders, not just Harley owners, he said, adding that the participants, many of them veterans themselves, represent all walks of life, all types of professions, from teachers to doctors to lawyers to construction people and public service officials.

"I'm glad we're taking care of our own," said Steve Nielson, 72, of Dana Point and a Vietnam veteran.  "Groups like this pull together and take care of our own, that's really what we're seeing here."

The Warrior Foundation Freedom Station, which gets 100 percent of the donations, benefits four main groups of veterans:

OC-HOG is one of more than a thousand local chapters sponsored by the Harley-Davidson Motor Company and local H-D dealers.  The iconic motorcycle brand has been part of American culture since 1903 and has a long history with the U.S. military dating back to World War I and II.