Roll Up To Wintm is back starting today and every Roll wins! It's just the second time ever that Tim Hortons guests can play Roll Up twice in the same year!

TORONTO, Sept. 20, 2021 /CNW/ - Playing Roll Up has been a beloved annual tradition for Tim Hortons guests since 1986. This year, for only the second time in Roll Up history, Tim Hortons is inviting guests to play the iconic contest twice. 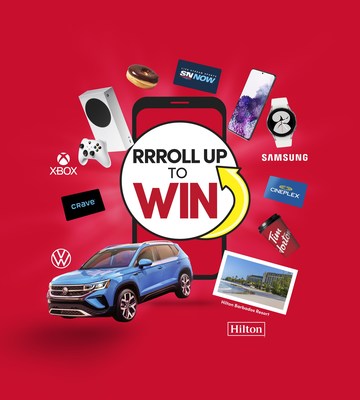 "It's been another challenging year but we wanted to give Canadians something to look forward to and enjoy this fall," said Hope Bagozzi, Chief Marketing Officer for Tim Hortons. "We're celebrating our guests and showing our appreciation by giving them a second chance to play Roll Up ?starting today ? and win with every roll."

Through Oct. 17, guests will earn one Roll for each eligible item purchased ? including most hot and cold beverages, breakfast sandwiches and breakfast wraps ? when scanning for Tims Rewards using their Tim Hortons app or their physical Tims Rewards card.

Guests with a physical Tims Rewards card must register for an account with an active e-mail address and link their card online to be able to reveal their Rolls on the Roll Up To Win website. Guests with unregistered Tim Rewards cards can still accumulate digital Rolls which can be revealed after they create an online account and link it to their physical card.

This version of Roll Up To Win has the largest prize pool ever, including nearly 12 million coffees and four million donuts, 45,000 $25 Tim Cards, and Tims Rewards points. Other prizes available to be won include:

For more contest information and rules, visit rolluptowin.ca. Roll Up To Win kicks off today and runs through Oct. 17. All Rolls must be revealed by Nov. 3, 2021.

In 1964, the first Tim Hortons® restaurant in Hamilton, Ontario opened its doors and Canadians have been ordering Tim Hortons iconic Original Blend coffee, Double-Doubletm coffees, Donuts and Timbits® in the years since. Over the last 55 years, Tim Hortons has captured the hearts and taste buds of Canadians and has become synonymous with serving Canada's favourite coffee. Tim Hortons is Canada's largest restaurant chain operating in the quick service industry with more than 4,000 restaurants across the country. More than a coffee and bake shop, Tim Hortons is part of the Canadian fabric and guests can enjoy hot and cold specialty beverages ? including lattes, cappuccinos and espressos, teas and our famous Iced Capps® ? alongside delicious breakfast, sandwiches, wraps, soups and more. Tim Hortons has more than 4,800 restaurants in Canada, the United States and around the world. For more information on Tim Hortons visit TimHortons.ca.