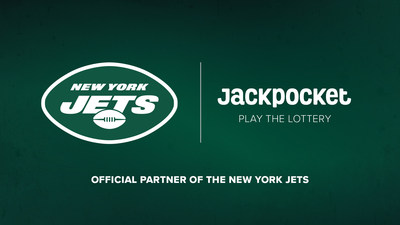 As the 2021 regular NFL season begins, Jackpocket is providing fans with a new way to play the lottery. With more than 20% of Jets fans playing the lottery each week, according to a 2020 YouGov survey, and digital lottery winners up 387.1% in the last year, now is a crucial moment for a partnership like this.

"As the NFL's first digital lottery sponsorship, Jackpocket is proud to partner with the Jets, a New York institution," said Jackpocket CEO Peter Sullivan. "With 87% of Jets season ticket holders residing in New York or New Jersey, we are excited to introduce this dedicated fanbase to a new, easy way to play for big lottery jackpots right from their phone."

Through this exclusive partnership, Jets fans and Jackpocket players alike will have access to free lottery tickets in the Jackpocket mobile app, game-day activations at MetLife stadium and prizes, and VIP game experiences, such as free game tickets, on-field experiences, and more.

As part of the partnership, Jackpocket will be integrated across a variety of Jets channels, including paid advertising, email, web, and social media. Perhaps most exciting, a Jackpocket branded scratch-off game will be unveiled in the official Jets mobile app, bringing a 360-degree connection between the two mobile platforms.

"We are excited to bring Jets fans more experiences and opportunities through our partnership with Jackpocket," said Jeff Fernandez, Vice President, Business Development & Ventures for the New York Jets. "From unique content to on-field experiences, we look forward to everything this partnership can offer our fans."

Jackpocket, which launched in New York in January 2021 and in New Jersey in December 2019, has seen historic success in both markets where its mobile app provides a secure way to order official state lottery tickets for Powerball, Mega Millions, Cash4Life, and more. Jackpocket players have won nearly $65 million in lottery prizes to date, including 5 individual players who have won prizes worth a million dollars or more.

About Jackpocket
Jackpocket is on a mission to create a more convenient, fun and responsible way to play the lottery. The first licensed third-party lottery app in the United States, Jackpocket provides an easy, secure way to order official state lottery tickets. Jackpocket is currently available in Arkansas, Colorado, Minnesota, New Hampshire, New Jersey, New York, Ohio, Oregon, Texas, and Washington, D.C., and is expanding to many new markets. Download the app on iOS or Android and follow along on Facebook, Twitter and Instagram.

About the New York Jets
The New York Jets were founded in 1959 as the New York Titans, an original member of the American Football League (AFL). The Jets won Super Bowl III, defeating the NFL's Baltimore Colts in 1969. In 1970, the franchise joined the National Football League in the historic AFL?NFL merger that set the foundation for today's league. As part of a commitment to its fan base through innovation and experiences, the team has created initiatives such as, its trailblazing Jets Rewards program, a state-of-the-art mobile app, and Jets 360 Productions, a comprehensive content platform that gives fans greater access to the team across all digital and social platforms. The organization takes great pride in a long-standing, year-round commitment to their community. These programs are funded by the New York Jets Foundation and look to positively influence the lives of young men and women in the tri-state area, particularly in disadvantaged communities.  The organization supports the efforts of the Lupus Research Alliance, youth football and numerous established charitable organizations and causes sponsored by the NFL. The New York Jets play in MetLife Stadium, which opened in 2010, and are headquartered at the Atlantic Health Jets Training Center in Florham Park, New Jersey. For more information about the New York Jets visit newyorkjets.com.