LOS ANGELES, Aug. 1, 2021 /PRNewswire/ -- In front of 7,000 fans at the LA Memorial Coliseum, the LA Giltinis won the Major League Rugby Shield in their inaugural season with a 31-17 win over Rugby ATL. Following a tight start on Sunday afternoon, both Rugby ATL and the LA Giltinis registered a penalty each, but it was after the water break that the home team took control of the game. 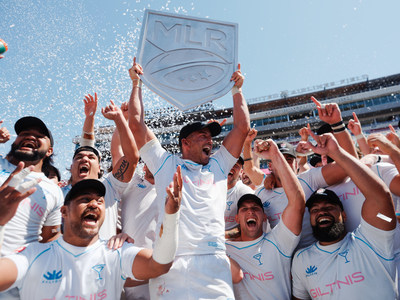 Quickfire tries for hulking wing John Ryberg allowed for his team to take a 12-point lead. The first score came after the 29-year-old drifted off his wing, connecting with Matt Giteau in the midfield to score his first, the second the result of running a good supporting line for Adam Ashley-Cooper.

At the break there would be just five points in the game, ATL rallying to plant themselves on their hosts' 5m line. Using their lineout, Atlanta hooker Marko Janse van Rensburg latched onto the ball after having thrown it in from the touchline and was driven over from the driving maul.

After the break, LA marched down the field with dominant carry after dominant carry, eventually winning a penalty that Matt Giteau struck over with 36 minutes still to play.

LA's third try came through DTH van der Merwe, who created space out wide as ATL brought in bodies to defend a Giltinis maul. The subsequent strong carries from the hosts disorganized their visitors before the ball found van der Merwe, and Giteau added another two points with the conversion.

It was after the hour mark that the players' efforts could be clearly seen, each group of players getting running repairs, and the allure of the Shield well worth the pain. With the clock ticking over the 70-minute mark, Giteau struck yet another penalty to keep his team in the ascendency after more good work at the ruck. Leaving the field not long after, the legendary Australia international embraced his former international teammate Ashley-Cooper, the last act the two will have on the rugby field together.

USA international Luke Carty struck the ball into the stands with the clock in the red, ending the game and confirming that the LA Giltinis were first-time MLR champions.

Major League Rugby is a professional sports league entering its fourth season on March 20, 2021 and represents the highest level of rugby competition in North America. The League evolved from seven teams in 2018, to 13 teams in 2021, featuring 12 from the United States and one from Canada. Matches are televised on CBS Sports Network, Fox Sports 2, among other national and local market platforms. Select matches are available to stream live in North America on The Rugby Network, and all matches are available on The Rugby Network for international fans. MLR prides itself in fostering intense and high-stakes competition, while bringing together a passionate community built on the values of Respect, Inclusivity, and Tradition. For more information about MLR, visit www.MajorLeague.Rugby, and download the MLR App on the App Store/Google Play.