MARKHAM, ON, July 30, 2021 /CNW/ - Honda Canada confirmed today that for the first time ever, the venerable and extremely popular Honda Monkey motorcycle will be available in Canada. 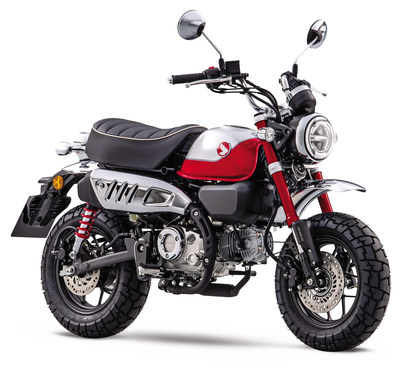 The pocket-sized Monkey has a six decades old history, a fact that no doubt contributed to the enthusiastic reception that this current iteration enjoys, and Canadians have been asking for. Beginning as a Japanese amusement-park ride, the Monkey has captured the hearts of generations the world over, offering enjoyable, accessible mobility through a likable design, tiny dimensions, and low weight. Today, the desire for an easy-to-handle motorcycle that puts smiles on faces remains alive and well. A master of fun, the 2022 Monkey builds on that passion, while opening the door to the next generation of enthusiasts.

The Monkey is powered by a torquey new engine with a fifth gear, the same powerplant as the new 2022 Grom that was announced last March. When it comes to miniMOTO models, Honda is an industry leader, and there's no better example of that than the legendary Monkey. Its latest generation honors history and tradition with looks and spirit that are faithful to the Monkey's earliest concept, but it touts modern features that help it perform well and run reliably?a combination that has proven to be extremely popular with customers around the world. It's yet another example of Honda producing not only the most diverse lineup of miniMOTO models, but also the most capable.

A hit with both the new generation of enthusiasts and nostalgic riders seeking a trip down memory lane (its heritage extends back to 1961, when the original version was used in a Honda-owned Japanese amusement park called Tama Tech), the Monkey oozes fun and charm in a pintsize package. Now, for the first time, the Monkey is available in Canada and comes with a fifth gear for more comfortable cruising, thanks to a new, modern engine with a wider spread of gear ratios and a 37-tooth final-drive sprocket (previously 34). The changes provide not only peppy acceleration from low speeds but increased top speed as well. The 124cc two-valve, overhead-cam, air-cooled engine has an undersquare design, with a narrower bore and longer stroke.

Boasting Honda's signature Neo-Sports Café styling in its most lightweight representation, the CB300R ABS is the ultimate entry-level sport-naked machine. It delivers exemplary sporting performance?including responsive, precise handling and excellent braking?thanks to its solid power, standard two-channel ABS (with IMU) and feathery, centralized unsprung weight. The optimum chassis feel and balance are complemented by premium features found on its larger-capacity siblings, but what really turns heads is the minimalist design, expressing attitude through exposed hardware and a dramatic cutaway tail. 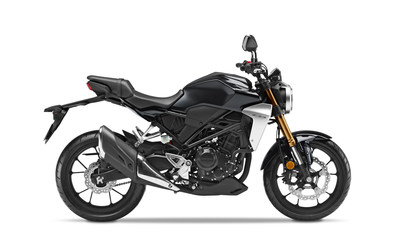