Avelo is the only scheduled carrier to fly nonstop between LA's most convenient and popular airport ? Hollywood Burbank Airport (BUR) ? and Monterey Regional Airport (MRY). One-way fares on this route start at $39*.

Avelo will also be the only airline to fly direct between LA and St. George Regional Airport (SGU), Provo Airport (PVU) and the Ft. Collins-Loveland Northern Colorado Regional Airport (FNL). One-way fares on these routes start at $49*. Flights can be booked at aveloair.com.

"Since our launch, we've been on a mission to bring low fares, more choice and greater convenience in air travel to Angelenos," said Avelo Chairman and CEO Andrew Levy. "These new routes will provide our LA Customers with unmatched affordability and direct access to four beautiful unserved destinations across the Western U.S. With the money you save and the caring service you experience, you'll want to explore all of our destinations."

LA's Best Airport
Whether Customers are departing or arriving, BUR offers a refreshingly convenient and hassle-free experience. Named the 2019 "Best U.S. Airport" by Fodor's Travel, BUR features include seamless curbside pickup and drop-off, smaller crowds, unrivaled speed for plane-to-carousel bag delivery, faster TSA security lines, and short walking distances between the terminal and ground transportation, parking and rental cars (instead of the time-consuming shuttles and trains necessary at other larger airports). All of this makes BUR LA's ultra-convenient, stress-free gateway.

"We are pleased and excited to see Avelo expand its service from BUR with these four new destinations and continue to enhance the convenience of the airport," said BUR Executive Director Frank Miller.

MRY: A Coastal California Wonderland
Nestled along California's majestic Central Cost, Monterey's crisp, Mediterranean climate, is a refreshing escape from the city. The area is famous for its diverse marine life and stunning ocean scenery. With mild fall and winter temperatures, visitors can explore the beautiful waters by deep sea fishing, whale watching, sailing or strolling down the coast. During the cooler months, Monterey hosts over a dozen holiday events ranging from New Year's Eve celebrations to annual lights festivals. The area is home to the Monterey Bay Aquarium, historic oceanfront parks, live music, theatre, seaside restaurants and more.

"We are excited to welcome Avelo to Monterey as our new air service partner. The Avelo model of affordability will help us reach another segment of our growing air service market and provide convenient access to the LA Basin for our travelers. We are confident the Monterey region will respond well to this new opportunity and look forward to welcoming new visitors from the LA area to our region and the wonderful communities that make up the Monterey Peninsula," said MRY Executive Director Michael La Pier.

"We know travelers are looking for affordable, convenient travel options and Avelo has shown a commitment to partner with smaller, more convenient airports like ours to make that happen. We are committed to bringing affordable and innovative commercial flights through our region, especially those in high-demand markets like the Greater Los Angeles area," said FNL Director Jason Licon.

PVU: The Heart of Utah Valley
Recognized nationally for its picturesque scenery, Provo is brimming with spectacular trails, rivers and snowy mountains. Located 15 miles from Sundance Ski Resort, visitors of all ages can enjoy an array of outdoor recreational activities, including skiing, snowboarding, snowmobiling, ice fishing, snowshoeing and more. Home to Brigham Young University, the region boasts a wide range of events and festivals, with local holiday-themed performances and celebrations taking place throughout the winter.

Those who fly to Northern Utah know that PVU is the more convenient and relaxing alternative to the congestion, baggage delays, long lines and added expense of Salt Lake City International Airport (SLC). PVU is just a 45-minute drive to downtown Salt Lake City and about an hour's drive to the region's world-famous ski resorts, including Park City, Snowbird, Alta and others.

Avelo also serves Salt Lake City's Ogden-Hinckley Airport (OGD), which offers those traveling to and from the region with an equally convenient gateway to Salt Lake and its neighboring outdoor attractions ? making Avelo Northern Utah's gate-to-slopes airline of choice.

SGU: An Outdoor Lover's Paradise
Below the Great Basin of Utah sits St. George, a perpetually sunny haven full of plateaus, red rock mesas and the gateway to Zion National Park ? one of the region's biggest attractions. While Southern Utah is known for spectacular national parks and desert-style outdoor recreation, travelers to St. George are just 90 minutes from Brian Head, one of the state's great ski resorts. Thanks to the region's warm autumns and mild winters, visitors can enjoy the great outdoors and magnificent views through a variety of activities, including hiking, golfing, camping and mountain biking.

"The return of convenient, nonstop access to Southern California is a big step forward for us," said SGU Manager Rich Stehmeier. "We set a record for usage in May, and we expect that this will only help fuel the popularity of SGU as a low-stress, high-value choice for travelers."

Avelo's Expanding Network
With the addition of these four routes to its network, Avelo's expanded fall and winter schedule will now fly between BUR and 12 popular destinations across the Western U.S., including Arcata-Eureka, California; Eugene, Oregon; Medford, Oregon; Pasco, Washington; Redding, California; Redmond-Bend, Oregon; Salt Lake City-Ogden, Utah; and Santa Rosa, California ? home to California's world-renowned wine country. Later this year, Avelo will begin service to and from its first East Coast base in Southern Connecticut at New Haven Airport (HVN), further expanding its network across the U.S.

"Los Angeles has started its comeback, and we are inviting visitors to safely and responsibly start their comeback to LA," said Los Angeles Tourism & Convention Board Chief Marketing Officer Don Skeoch. "Avelo's new service coincides with our national advertising campaign, and we hope visitors from our important feeder markets ? newly serviced by Avelo ? will find it even easier to experience all LA has to offer."

Avelo operates a fleet of Boeing Next Gen 737 aircraft?one of the most fuel-efficient commercial aircraft in the world. Boeing 737-800 aircraft with 189 seats will service the four new routes, providing Customers with a large, comfortable cabin with more room, seats and seating options than the regional aircraft typically serving these airports. Avelo aircraft feature 60 seats with up to 9 inches of extra legroom starting at $11.

Flight times based on local times.

About Avelo Airlines
Avelo Airlines was founded with a simple purpose ? to Inspire Travel. The airline offers Customers time- and money-saving convenience, surprisingly low everyday fares, and a refreshingly smooth and caring experience through its Avelo Soul of Service culture. Operating a fleet of Boeing Next Generation 737 aircraft, Avelo serves 12 destinations across the Western U.S., including its base at Los Angeles' Hollywood Burbank Airport (BUR). Later this year, Avelo will begin service to and from its first East Coast base ? New Haven Airport (HVN) ? serving the Southern Connecticut region. For more information visit aveloair.com.

About Los Angeles' Hollywood Burbank Airport (BUR)
Hollywood Burbank Airport (BUR) is owned and operated by the Burbank-Glendale-Pasadena Airport Authority, a joint powers agency created in 1977 between the Cities of Burbank, Glendale and Pasadena. More information can be found on the airport's website, HollywoodBurbankAirport.com, and on the airport's Facebook, Twitter and Instagram feeds.

*The one-way $39 and $49 fares include government taxes and fees. The fares are available on a limited number of seats and must be purchased for flights completed within 14 days of each destination's respective first departure. Additional fees for carry-on and checked bags, assigned seats and other optional services apply. For full terms and conditions see Avelo's Contract of Carriage. 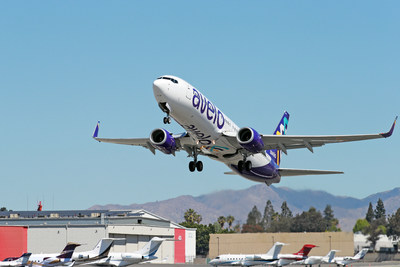