ST. JOHN'S, NL, May 19, 2021 /CNW/ - Canadians want cleaner air and cleaner water for their children and grandchildren. That's why the Government of Canada's strengthened climate plan is helping Canadians cut pollution in their communities, save on energy costs and create good jobs. 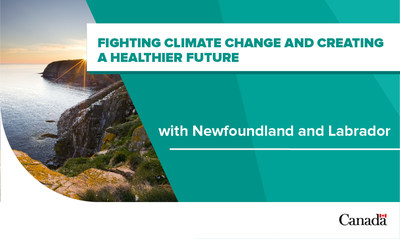 Today, the Minister of Natural Resources, the Honourable Seamus O'Regan Jr., on behalf of the Minister of Environment and Climate Change, the Honourable Jonathan Wilkinson, announced approximately $4.8 million from the Low Carbon Economy Leadership Fund to support 13 climate action projects in Newfoundland and Labrador. The Government of Newfoundland and Labrador is also contributing $3.3 million in support of these initiatives. These investments come from the province's Climate Change Challenge Fund.

"Climate change is real, and it's changing the lands around us. We are building a cleaner, more prosperous future that leaves no one behind. These 13 projects will lower emissions and create jobs throughout our province. This is how we get to net zero."
? The Honourable Seamus O'Regan Jr., Minister of Natural Resources

"Through projects such as these, and our Climate Change Action Plan, we are working to reduce greenhouse gas emissions, stimulate clean innovation and growth, and build resilience to climate change impacts. Such projects are part of the work to support the development of a green economy and initiatives to move the province forward both environmentally and economically."
? The Honourable Bernard Davis, Minister of Environment and Climate Change, Government of Newfoundland and Labrador

"Renaturalizing 11.4 hectares of land across 13 City parks and open spaces reduces the need for turf maintenance in those areas, which reduces our fossil fuel use, saving greenhouse gas emissions and financial resources. The City of St. John's has a strategic priority to be a sustainable city today and for future generations. Replanting previously cleared sites is identified in the City's Urban Forest Management Plan and the benefits of this reforestation project align with our recently released Corporate Climate Plan to reduce greenhouse gas emissions in City operations while stabilizing energy costs by supporting energy efficiency."
? Danny Breen, Mayor, City of St. John's