LOS ANGELES, May 14, 2021 /PRNewswire/ -- A record $25 million conservation challenge grant from Wallis Annenberg and the Annenberg Foundation to the National Wildlife Federation's #SaveLACougars campaign to build a wildlife crossing in the Los Angeles area will help the landmark project break ground later this year. The wildlife crossing at Liberty Canyon over the 101 Freeway ? which will be the largest wildlife crossing in the world ? will reconnect a long-fragmented ecosystem, a biodiversity hotspot, and help protect the endangered mountain lion population and other wildlife that make their home in the Santa Monica Mountains. 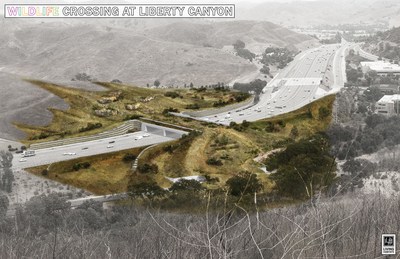 The wildlife crossing at Liberty Canyon is unprecedented in many ways. It is the first urban crossing of its scale ? spanning 210 feet over ten lanes of highway and pavement, along with an access road ? and is the first significantly funded through private donations along with public support. The #SaveLACougars campaign to build the crossing will serve as a model for urban wildlife conservation efforts across the globe. With this donation, the campaign has raised over $44 million to date, and needs to secure an estimated $35 million to unlock the Annenberg Challenge Grant and to break ground in November.

"This incredible conservation challenge grant from Wallis Annenberg and the Annenberg Foundation ? the largest ever received by the National Wildlife Federation ? puts us closer to breaking ground this year. Wallis Annenberg's grant will protect this global biodiversity hotspot - recognized as one of only 36 biodiversity hotspots worldwide - and ensure that California's iconic mountain lions and other wildlife can find the food and mates they need to survive by reconnecting the Santa Monica Mountains and the Simi Hills and beyond," said Collin O'Mara, president and CEO of the National Wildlife Federation. "Thank you also to the visionary leadership of the intrepid Beth Pratt as well as every donor who is making this transformative project a reality."

"There's a reason I wanted to support this crossing and issue this challenge: We need to move beyond mere conservation, toward a kind of environmental rejuvenation," said Wallis Annenberg, Chairman, president and CEO of the Annenberg Foundation. "Wildlife crossings are powerfully effective at doing just that -- restoring ecosystems that have been fractured and disrupted. It's a way of saying, there are solutions to our deepest ecological challenges, and this is the kind of fresh new thinking that will get us there. To me, this is an important local and regional initiative even a model for the kind of change we need all around the world. I'm enormously proud that California is in the vanguard of this effort, and that our foundation can be a part of it too. Our hope is that a strong state and federal role won't be far behind."

"Time is running out for these mountain lions, and the National Wildlife Federation is so grateful to The Annenberg Foundation for showing extraordinary leadership to help make this crossing a reality," said Beth Pratt, California regional executive director for the National Wildlife Federation and leader of the #SaveLACougars campaign. "We hope this game-changing gift will inspire other philanthropists and public agencies to step up so we can ensure we break ground in November."

The wildlife crossing at Liberty Canyon will take place at the US-101 freeway where it runs through the city of Agoura Hills. The 101 freeway is a heavily travelled commuter route that serves the Greater Los Angeles area; connects Los Angeles and Ventura Counties; and acts as the primary access route to and from downtown Los Angeles, various residential communities, and tourist destinations in Los Angeles, as well as the central California coast. This location is a formidable and virtually impenetrable barrier for many wildlife species including mountain lions, bobcats, gray foxes, coyotes, and mule deer that inhabit and travel between the Santa Monica Mountains, the Simi Hills, and the Santa Susana Mountains ? over 300,000 cars pass through this freeway site daily.

The wildlife crossing will feature robust engineering and an innovative landscape design that will blend the structure into the surrounding mountain habitat and will include vegetated barriers to reduce the impact of vehicle traffic noise and roadway light on wildlife movement.

As evidenced from decades of wildlife crossing projects across the world, such as the successful structures in Banff National Park, and the array of animals seen using an overpass in Utah in a recent viral video, wildlife crossings work. The wildlife crossing at Liberty Canyon responds to two decades of National Park Service research, and the need to create a vital connection for the endangered mountain lion population and other wildlife that make their home in the Santa Monica Mountains. As a major green infrastructure project for the state of California, construction for the crossing will generate jobs in the region and economic benefits into the future.

The wildlife crossing is a public-private partnership of monumental scope that has leveraged the expertise and leadership of dozens of organizations and institutions. The core partners include Caltrans, the National Park Service, the Santa Monica Mountains Conservancy/Mountains Recreation and Conservation Authority, Resource Conservation District of the Santa Monica Mountains, and the National Wildlife Federation. The project partners also added a world-renowned design team led by a landscape architectural practice, Living Habitats LLC, that collaborates with Caltrans and coordinates with a broad team of wildlife crossing experts in the planning and design development of the wildlife crossing.

To learn more about the #SaveLACougars campaign and its efforts to build the wildlife crossing at Liberty Canyon visit https://savelacougars.org/ 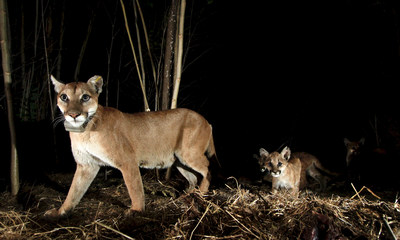