A First in Israel: Friends of Zion Museum Launches a 5-Star Guesthouse in Jerusalem, Cost-Free, for Holocaust Survivors

JERUSALEM, April 19, 2021 /PRNewswire/ -- The Friends of Zion Museum is launching a guesthouse for Holocaust survivors. The guesthouse was built on the Museum's campus grounds in Jerusalem, where the survivors will be able to stay as guests, free of charge. The project, the brainchild of Museum founder Dr. Mike Evans, was built at a cost of approximately NIS  10 million, includes seven units, tailored and accessible for the survivors, featuring 5-star hotel amenities including a clubroom, kitchen and dining hall, laundry rooms and warehouses. The project can accommodate up to 14 guests. 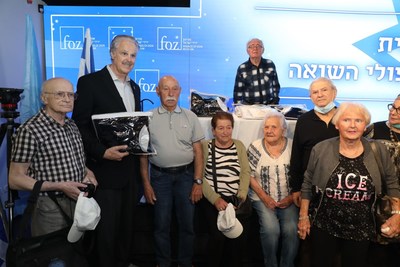 The guesthouse is going to be operated jointly with the Yad Ezer La-Haver nonprofit, which will be providing the coordination service for guesthouse arrivals, free of charge. A program is going to be launched in the coming months, through which the survivors will be hosted for a visit to Jerusalem, lodging at the Museum's guesthouse and will participate in an event at the Wailing Wall, where they will celebrate their Bar- and Bat-Mitzvas, a seminal ceremony which they had been deprived of due to their circumstances at the time.

Some 300 Holocaust survivors have registered for the project so far, and will be participating in it in groups this coming year. First occupants checked in this week, and today the first Bar- and Bat-Mitzva ceremonies took place at the Wailing Wall with the Chief Rabbi of the Wailing Wall, Rabbi Rabinovich.

The project was launched in a festive ceremony on the Friends of Zion Museum campus in Jerusalem. Leading the event was Museum founder Dr. Mike Evans, with Rabbi Shimon Elmaliach in attendance, who installed the Mezuzah. Other dignitaries present were Jerusalem Deputy Mayor Elisha Peleg, General (Res.)  Yossi Peled, who is also Museum Chairman of the Board, Shimon Sabag, General Manager of the Yad Ezer La-Haver nonprofit, Commissioner of the Prison Service Lieutenant General Katy Perry, MK Katy Sheetreet, Adv. Nir Kimhi, a trustee of the Friends of Zion in Israel, Ms. Tami Raveh and numerous foreign ambassadors.

Dr. Mike Evans, Friends of Zion Museum Founder: "I am proud and thrilled to inaugurate this guest house today, which will serve as a home for Holocaust survivors when they come to visit Jerusalem. This home will always be open to them, and we are deeply honored to be their hosts. The Holocaust survivors are close to our hearts and we are working hard to keep the memory of the Holocaust alive through the museum contents, through our events and through our ongoing collaboration with the Yad Ezer La-Haver non-profit". Dr. Evans told the Holocaust survivors present at the ceremony that "You are the light that shines on mankind when the world goes dark".

Last year the Friends of Zion Museum opened an international media center aimed at disseminating messages strengthening Israel in the unending battle against anti-Semitism worldwide and at against the incessant anti-Israel boycott initiatives. The Museum is also working on building an online research institute, which will be called the "Friends of Israel Institute". It is expected to revolutionize the way Zionism is taught and presented to the public at large. The Institute will help disseminate articles, research and instructional material to millions of people worldwide, using modern tools. Through outreach programs, these will help in the fight against anti-Semitism, in defending Jew worldwide and in Israel and against the various BDS initiatives.

The Friends of Zion Museum is an interactive museum, unique in Israel, which opened about five years ago in downtown Jerusalem. The Museum tells the fascinating stories of Israel's hero friends over the generations, those who expressed their wholehearted support for the Zionist idea, their faith in the Jewish People and in the State of Israel. The Museum displays dozens of state-of-the-art installations, including rotating installations, each featuring touchscreens, audiovisual elements and lighting technologies which guide the visitor traffic through its halls. The visitors are exposed to the story of our friends from all the different peoples of the world, who have helped the Jewish people and promoted the establishment of the State of Israel. These include persons such as Orde Wingate, Queen Victoria, Raoul Wallenberg, Oskar Schindler and others.

The Museum was founded by Dr. Mike Evans Dr. Michael D. Evans), author of 107 books, many of which have made the New York Times bestsellers list and have sold over 38 million copies worldwide. Evans served as Jerusalem Advisor to former President Trump and he is also the founder of numerous initiatives supporting Israel, including: the Jerusalem Prayer Team, which has 76 million members, and the Holocaust Memorial Museum Corrie ten Boom in Haarlem, The Netherlands.