OTTAWA, April 19, 2021 /CNW/ - This year marks the tenth time that Hydro Ottawa is selected as one of Canada's Greenest Employers, a recognition of the company's ongoing commitment to environmental sustainability in all areas of its business operations. 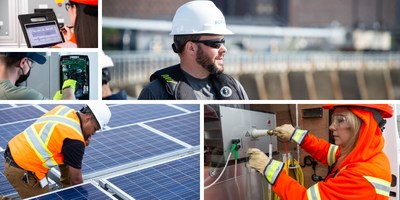 Every year, Hydro Ottawa strives to not only maintain its environmental commitments, but also to rise to new challenges. Hydro Ottawa invests in producing clean, renewable energy, but the vision for environmental sustainability encompasses far more. The company has adopted an end-to-end approach to sustainability ? transitioning to cleaner energy production, helping customers conserve energy and lead energy efficient lifestyles, designing its facilities to LEED Gold standards, implementing green technology, and improving waste management. In spite of a global pandemic, Hydro Ottawa has remained committed to these initiatives through: a strategic partnership with the Zibi Canada and Kruger Products; shifting its youth education program to online promotion of conservation and clean energy jobs; collaborations with the City of Ottawa; and, refurbishment plans to sustain a growing city with additional clean, safe and renewable power.

"Safety and sustainability are the foundation of a healthy and happy city. This is why Hydro Ottawa has placed these elements at the core of all its business operations. As we transition into a new normal amidst the COVID-19 pandemic, we only lean harder into our vision for the health and safety of our employees, customers, and our community. With determination, grit, and innovation, we position ourselves for continual growth in environmental stewardship."

Hydro Ottawa Holding Inc. (Hydro Ottawa) is a private company 100 per cent owned by the City of Ottawa and whose core businesses are electricity distribution, renewable energy generation, and energy and utility services. Hydro Ottawa owns and operates three primary subsidiary companies: Hydro Ottawa Limited ? delivering electricity to more than 340,000 customers in the City of Ottawa and the Village of Casselman; Portage Power ? the largest Ontario-based municipally-owned producer of green power that has over 128 megawatts of installed green generation capacity ? enough to power 107,000 homes; and Envari ? an energy solutions company offering products and services that help reduce energy consumption and costs for municipalities, industrial and commercial clients, and various local distribution companies.