Only 7% of larger companies have digitally savvy executive teams, and these teams deliver higher revenue growth and net margins

CAMBRIDGE, Mass., March 3, 2021 /PRNewswire/ -- A new article released today by MIT Sloan Management Review reveals that companies with a digitally savvy top management team (TMT) perform better. Among larger companies, only a small fraction ? 7% ? had a TMT with more than half made up of digitally savvy members, and those companies outperformed the rest on growth and valuation by more than 48%. 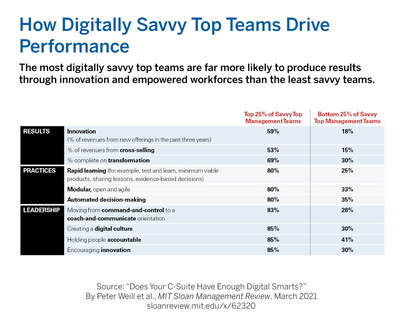 Digital savviness is an understanding, developed through experience and education, of the impact that emerging technologies will have on a business's success over the next decade.

The article, titled "Does Your C-Suite Have Enough Digital Smarts?," reports that as the percentage of TMT members with digital savviness increases, so does net margin and revenue growth.

"As the global economy begins to recover from pandemic-induced slowdowns, the digital savviness of top teams will make the difference between the winners and the also-rans across industries and geographies," says Peter Weill, report coauthor, senior research scientist, and chair of the Center for Information Systems Research (CISR) at the MIT Sloan School of Management. "Now is the time to consider the digital savviness of your top management teams and ask yourself what you can do to bolster it for your company's future success."

The article is based on research that encompasses C-level executives and leaders of functions and geographic territories in 1,984 companies globally. (See "The Research" section of the article for research methodology details.)

1.      The digital savviness of top executives varies widely by role and industry.

Read the MIT Sloan Management Review article, "Does Your C-Suite Have Enough Digital Smarts?" for practical and actionable recommendations that companies can take to increase the digital savviness of their senior executives.

Peter Weill is a senior research scientist and chair of the Center for Information Systems Research (CISR) at the MIT Sloan School of Management. His work centers on the role, value, and governance of digitization in enterprises. Ziff Davis recognized Weill as No. 24 of The Top 100 Most Influential People in IT, the highest-ranked academic.

Stephanie Woerner is a research scientist at the MIT Sloan Center for Information Systems Research (CISR), where she studies how companies manage organizational change caused by the digitization of the economy. Her research centers on enterprise digitization and the associated governance and strategy implications.