President of Honduras: "A person in collusion with drug trafficking would not have approved the extradition of alleged drug dealers or the purging of the National Police Force"

TEGUCIGALPA, Honduras, Feb. 25, 2021 /PRNewswire/ -- The President of Honduras, Juan Orlando Hernández, introduced to the National Congress a reform to toughen laws against maras and gangs, reaffirming his commitment to continue the fight against transnational crime until the last day of his government "I do not know any other way to live but to fight against evil". 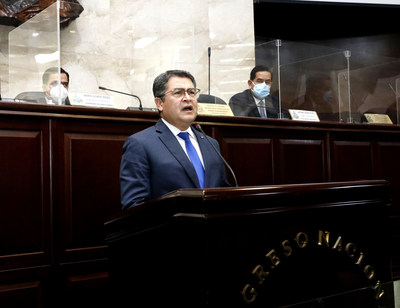 Hernandez spoke before the country´s legislature and when asked about the documents filled by the US prosecutors suggesting that the president himself was under investigation, he expressed that a person in collusion with drug trafficking would not have approved the extradition of alleged drug dealers or the purging of the National Police, referring to this and other measures against transnational crime in Honduras.

The president remarked that the drug lords found the magic key to go unpunished by surrendering, negotiating and accusing the Honduras officials that captured, extradited and put them behind bars."

He also said that he is hopeful that "the next government will continue the battle against transnational crime, for the peace and tranquility of Hondurans, and be willing to build on what Honduras has achieved, because then the country can definitely win the war against criminals, gangs and drug trafficking".

Since Juan Orlando Hernández presided over the National Congress, the foundations to fight against drug trafficking began to be laid.

President Hernández pointed out that it is necessary to remind the country how things were a decade ago and how Honduras was about to become a failed state. "Less than fifteen years ago, the US embassy in Honduras said that the government at that time was so closely linked to organized crime that close cooperation between the forces of order was impossible," said the president.

In addition, he stated that drug cartels and gangs operated with impunity, and if they ever went to jail, it didn't matter because they controlled the prison system.

Hernández also recalled that less than ten years ago Honduras had the highest homicide rate in the world and extradition did not exist, because it was not allowed by the Constitution.

"The National Police was corrupted and penetrated by organized crime, to such a degree that, according to confessed drug traffickers, they associated with senior police officials to assassinate the head of the anti-drug unit," he said.

Hernández affirmed that the situation in 2010, when he assumed the presidency of the National Congress, was difficult. However, the legislature passed a series of eight security laws that were hated and feared by drug traffickers.

He stressed that laws were passed to confiscate the assets of organized crime, making it clear that the control of the confiscation of assets would be in the hands of the Public Ministry and the Judiciary, independent State Powers and institutions in this Central American country.

From that point of view, he indicated that anyone could see "who is who", because no one linked to drug trafficking or intimidated by drug lords would ever fight to confiscate the assets of criminals.

President Hernández added that Honduras has extradited 24 people charged and requested by the United States; of those, 15 turned themselves in directly to negotiate with the DEA, and five have been captured by the Honduran authorities.

SOURCE Government of the Republic of Honduras