BRISTOL, Pa., Jan. 20, 2021 /PRNewswire/ -- For the ninth consecutive inauguration, Lenox Corporation has designed and gifted the official Inaugural gifts from the American people, given to the President and Vice President of the United States. On January 20, 2021, Lenox Corporation on behalf of the American people will gift the custom-made, one-of-a-kind engraved crystal vases to the President and Vice President following the swearing-in ceremonies at the U.S. Capitol. Lenox Corporation offered these stunning gifts to the Joint Congressional Committee for Inaugural Ceremonies (JCCIC), and the design was approved by the committee.

Lenox Corporation, the oldest and most prestigious maker of crystal and fine china in the United States, has designed and created the Inaugural gift for the incoming president since George H. W. Bush in 1989. For the Inauguration, Lenox's Chief Creative Officer, Fawn Ostriak along with her team of experts and master glass-cutter Peter O'Rourke worked for months to create a gift that encapsulates the spirit of the American people and the new presidency. Fawn Ostriak handed over the stunning pieces of craftsmanship to the JCCIC in preparation for the gifting ceremony.

"On behalf of the American people, I am pleased to accept Lenox's gift for the 59th Inaugural Ceremonies," said U.S. Senator Roy Blunt, Chairman of the Joint Congressional Committee for Inaugural Ceremonies. "Lenox has crafted a beautiful gift that perfectly encapsulates this historic tradition. I look forward to it being presented to the newly elected President and Vice President."

The inspiration for this year's Inaugural gifts comes from archival illustrations. The President's vase features an illustration of the White House set within a classic scrollwork cartouche. For the Vice President there is an image of the Capitol also set within a classic scrollwork cartouche. Both vases feature deep cutting and polishing techniques and are crafted entirely by hand in Pennsylvania by master craftsman, Peter O'Rourke. The vases are made of lead crystal and stand at a stately 17" tall and will be placed on top of cherry wood bases that bear an inscription of the date and occasion engraved into silver-plated plaques.

"Lenox Corporation is honored to have been the first American china to be used in the White House and to have been selected as the designer and manufacturer of choice for the past 29 years. And this year we are especially proud to produce the Inaugural Commemorative Gift for the President and the very first female Vice President of the United States of America," said Mads Ryder, CEO of Lenox Corporation.

For 103 years, Lenox has created fine china dinnerware for the White House as well as the Vice President's official residence, over 300 U.S. Embassies and more than half of the governors' mansions. Lenox became the first American china to be used in the White House in 1918 when President Wilson commissioned the company to create a 1,700-piece service bearing the presidential seal in raised gold. Over the years, Lenox has created new state services for five additional presidents - Roosevelt, Truman, Reagan, Clinton and George W. Bush -  that reflect not only the style of the day, but the timeless beauty of Lenox's renowned ivory china.

Lenox, an American company and market leader in tableware & giftware, was founded in 1889, with a singular vision to set the highest standards for quality, artistry & beauty. The company markets its products under the Lenox, Dansk and Reed & Barton brands.  In addition to its core brands, Lenox creates and distributes the Kate Spade New York tabletop collection. Lenox products are sold through major e-commerce retailers, department stores, gift and specialty retailers, as well as through the company's own websites.  Over its 130-year history, Lenox has been the recipient of numerous design awards and has the distinction of being the first American dinnerware used in the White House.  Lenox is headquartered in Bristol, PA.  For more information on Lenox, please visit www.Lenox.com . 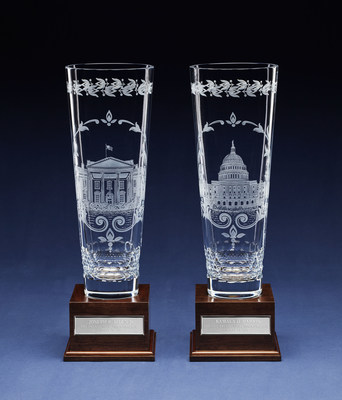